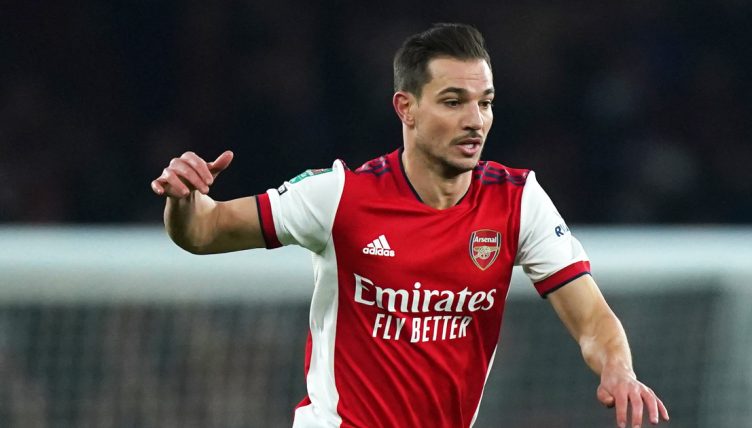 Arsenal and match officials have rarely been a match made in heaven.

Throughout the season, Arsenal have picked up more red cards than anyone else and their supporters complain about refereeing decisions an estimated three times more than any other fanbase on average.

But they do sometimes have a point and, in the first half against Brentford on Saturday afternoon, they had every right to feel aggrieved.

Right-back Cedric Soares, filling in for the not yet fit Takehiro Tomiyasu, picked up the ball at the edge of the box and fired in a fierce shot which was blocked by striker Yoane Wissa in the penalty area.

The Arsenal players appealed loudly for a penalty, but referee John Moss was having none of it and waved them away, giving a corner.

Replays show that Wissa blocked the ball with his elbow, making Arsenal’s claims for a penalty seem very fair, and there is amazement amongst the fans that a spot kick was not awarded.

Mikel Arteta will certainly point to this incident should Arsenal fail to grab all three points, and was very vocal in his criticism of Premier League refereeing after Gabriel Martinelli received a controversial red card in the previous match against Wolves.

“You ask me if I am happy with the decisions that we have had this season – I am not at all,” the Arsenal manager claimed after the game.

“But that is a conversation that I will have with the officials privately.”

Apparently his arm is in a natural position… pic.twitter.com/cFmDzsavQV