Throwback: Henry celebrates title at Tottenham after being told not to 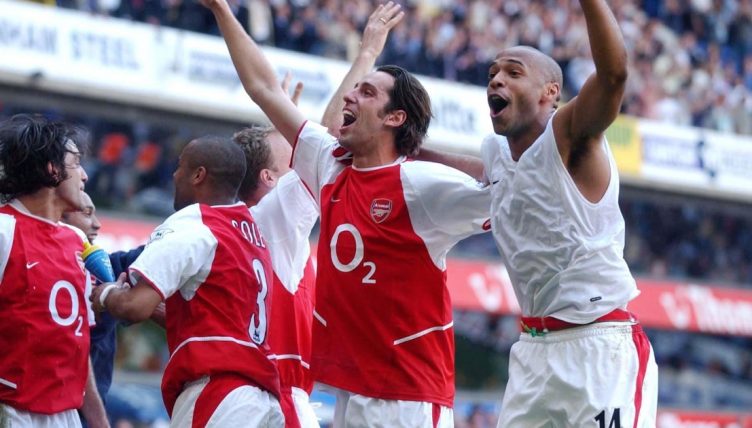 Arsenal enjoyed one of the sweetest moments in the club’s history when they sealed the Premier League title away to their fierce local rivals Tottenham Hotspur back in 2004.

Gunners legend Thierry Henry had given his word that he wasn’t going to celebrate for fear of inciting the home crowd at White Hart Lane.

But plans changed after a classic north London derby ended with a 2-2 draw.

Arsene Wenger’s vintage Arsenal side raced into an early lead through Patrick Vieira before Robert Pires doubled their advantage midway through the first half. But Spurs fought back, getting back into it through Jamie Redknapp and eventually equalising late on through a Robbie Keane penalty after Jens Lehmann felled the Republic of Ireland international.

Still, a point was enough for Arsenal’s title – and Spurs’ celebrating a draw is what annoyed Henry and made him determined to celebrate.

“It was kind of weird because I remember we had orders from the police not to over-celebrate if we won the title there,” Henry reminisced in an interview with Sky Sports.

“They started to celebrate like they won the league so I thought, ‘Wait, do they actually realise we just need a point to be champions?’

“I said to Ashley Cole at the final whistle, ‘Now we are going to celebrate’.

READ: The Englishman who played for Arsenal’s Invincibles but retired at 27

“We wanted to be humble at the beginning of the game but you want to celebrate a draw? Really? We just needed a point!

“We celebrated and the pictures are there to prove it now. It was always important to have the last laugh and the story will tell you we won the league at the Lane, and it wasn’t the first time by the way.”

Arsenal had four games spare and went on to complete a historic unbeaten campaign, while their rivals ultimately ended up a lowly 14th, having picked up half as many points as Wenger’s Invincibles.