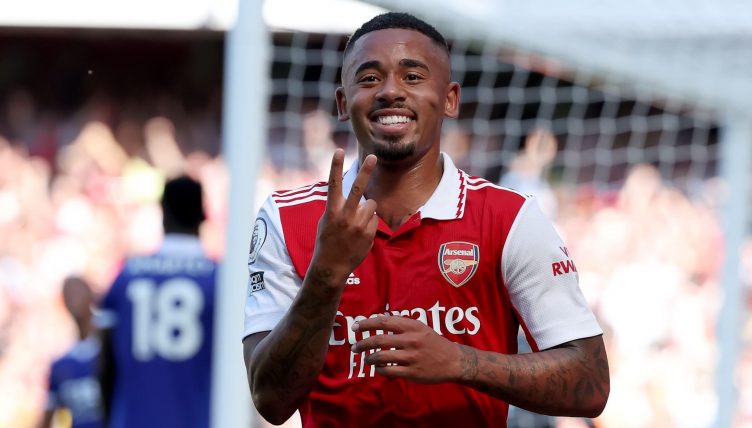 Gabriel Jesus scored a brilliant header for Arsenal in their 3-0 Premier League win over Brentford on Sunday – and his Vinicius Jr-esque dance celebration was endearingly copied by his team-mate Bukayo Saka.

Arsenal were outstanding from start to finish against Brentford, Mikel Arteta’s team looking completely transformed from the one that lost away to the same opposition a little over a year ago.

This was their sixth win in their first seven Premier League games of the season and they now sit top of the table.

Gabriel Jesus has played a significant role in that good form, linking up well with his team-mates and scoring four league goals since his arrival from Manchester City.

The latest of those was Arsenal’s second of the game against Brentford. The Brazilian rose majestically to meet a clipped Granit Xhaka ball and powered a header past David Raya in the Brentford net.

Jesus then ran over to the television cameras and danced in celebration – an act of solidarity with his international team-mate Vinicius Jr, who was racially abused by a Spanish football agent in the week.

The agent in question, Pedro Bravo, was criticising Vinicius’ dance celebrations on the god-awful ‘Chiringuito’ television programme and compared his behaviour to that of a monkey.

Bravo’s remarks were strongly condemned by Real Madrid and Vinicius, who also received messages of support from the great and the good of Brazilian and world football.

Pele took to Twitter to write: “Football is joy. It’s a dance. It’s more than that. It’s a real party.

“Although, unfortunately, racism still exists, we will not allow that to stop us from continuing to smile. And we will continue to fight racism every day in this way: fighting for our right to be happy and respected.”

Jesus put on his own show of solidarity by pulling out the exact same dance moves that Bravo had criticised.

As he did, Saka came up to celebrate with him and attempted to imitate Jesus’ Vini-inspired shapes. While Saka didn’t quite have the Brazilian swagger, it was still a lovely moment.

Oh, and one last thing: baila Gabriel Jesus, baila Bukayo Saka, and baila Vinicius Jr. We love to see it.

Gabriel Jesus shows off his dance moves in his goal celebration, as a tribute to Vinicius Junior. 😍🕺 #afc pic.twitter.com/6tXhDmtLoF

READ NEXT: No wonder Arsenal shipped out Pepe, Marquinhos is ready to go now