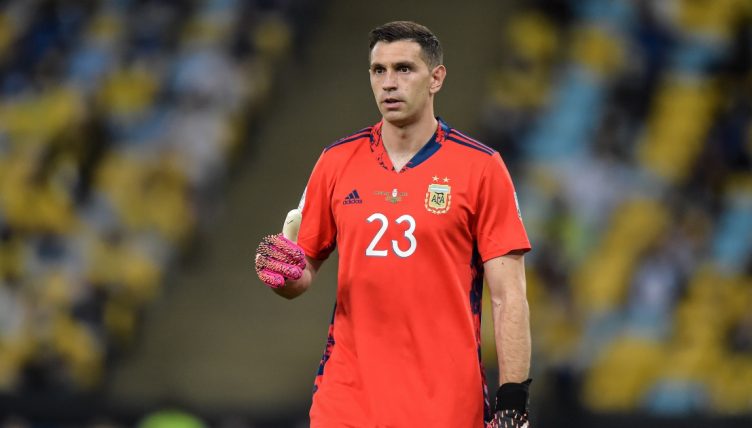 Emiliano Martinez has established his reputation as one of football’s elite shithouses – and the Aston Villa goalkeeper was up to his old tricks after Argentina’s 1-0 victory over Colombia on Tuesday night.

Whether it’d be putting off Bruno Fernandes from the spot, dancing in front of the packed Stretford End after Fernandes had skied said penalty or hilariously psyching out Colombian strikers during last summer’s Copa America, Martinez has form for winding up his opponents.

And the 29-year-old goalkeeper demonstrated his knack for comic timing by interrupting the post-match interview of his Colombian counterpart with his celebrations.

During Carlos Vargas’ interview, Martinez can be seen in the corner of the screen parading the Copa America trophy around the stadium – which Argentina are only able to celebrate with their fans now due to the Covid-19 pandemic.

It was a moment of hilarity from Martinez who is fast becoming a cult hero in Argentina.

The Villa shot-stopper was celebrating after Lionel Scaloni’s side saw off Colombia in their latest World Cup qualifier.

Inter Milan striker Lautaro Martinez turned in the only goal of the game for the hosts on the half-hour mark, ensuring they remain four points behind group leaders and bitter rivals Brazil.

Argentina have already qualified for the finals in Qatar and look like a stronger outfit that flopped at the 2018 World Cup in Russia.

Tuesday’s victory extended their unbeaten run to 29 matches and the Copa America holders took the opportunity to flaunt their trophy to their delighted supporters.

Yet Martinez still managed to steal the show.