Watch: Barca’s Jordi Alba booked after firing back at missile-throwers 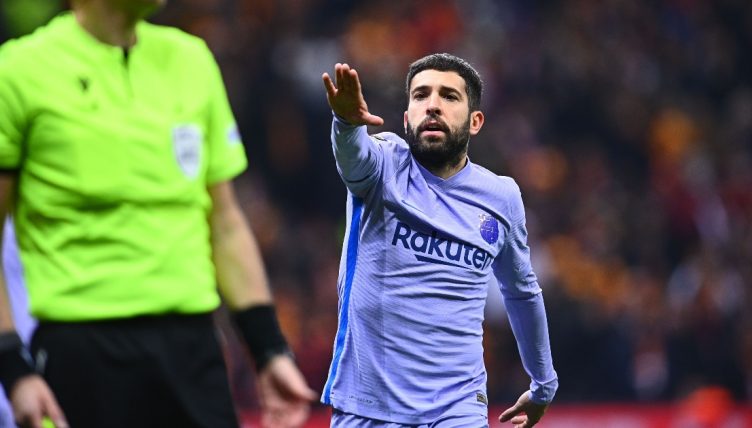 Barcelona defender Jordi Alba showed his frustration at Galatasaray fans that threw objects onto the pitch in the Europa League last 16 by smashing the match ball into the stands.

The incident happened in the final minutes of the second leg in Istanbul with the hosts staring down the barrel of an exit from the competition at the hands of the Catalans.

Marcos Teixeira had fired the hosts ahead but goals from Pedri and Pierre-Emerick Aubameyang either side of half-time secured a 2-1 victory for Barcelona and their progression into the last eight.

In the 85th minute, tensions boiled over within the home support as Alba was struck on the back of the leg by a bottle when he was about to take a throw-in. He turned around in disgust and cleared the ball aggressively into the crowd.

The Spain international’s reaction caused Gala players to sprint over and confront Alba who quickly walked away from the enraged hosts as his team-mates defended him.

“We didn’t do our homework last week and now we have to win away at a tough stadium, with fans that really support the team, some of the best in Europe,” Barca coach Xavi Hernandez said in his pre-match press conference.

The Spanish giants certainly felt the full wrath of the Turkish side’s intimidating atmosphere which ultimately crossed the line.

Alba might regret his emotional response to the missile that came his way. But he had the last laugh – Barca remain in Europe at Gala’s expense.