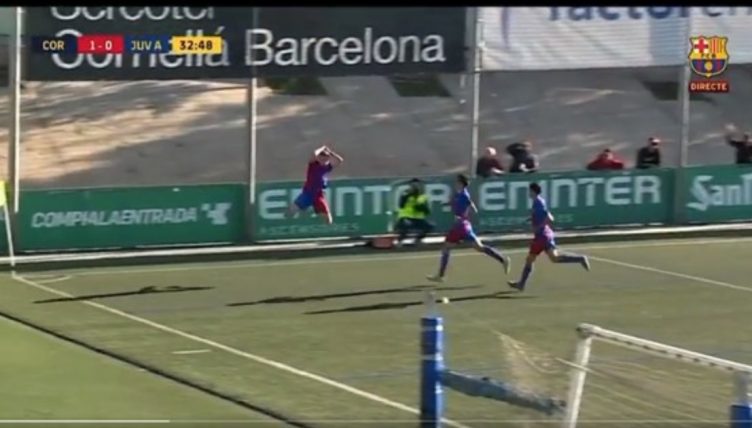 Barcelona’s La Masia academy is one of the best in the world at producing top-level players, and the talent on display, even in the lowest age groups, is frightening, and this goal from Fermin Lopez caught the eye for two notable reasons.

When a club has had so many legends walk through the doors at the Nou Camp, one would expect the academy stars to idolise the likes of Lionel Messi and Ronaldinho.

The coaches and fans watching the academy side play were therefore shocked when Lopez scored an incredible overhead kick from outside the box, but then covered their eyes in horror as the starlet copied the celebration of Cristiano Ronaldo.

Ronaldo was Barcelona and Messi’s nemesis for over a decade, facing Barcelona in two Champions League finals before spending nine incredibly successful years at Real Madrid.

This goal from the youngster was reminiscent of Ronaldo’s stunning effort against Juventus in the Champions League for Real Madrid, and Lopez copied both the audacity of the goal and the confidence of the celebrations that followed.

“Obviously people are talking about the second goal, it was amazing, probably the best of my career,” Ronaldo said after his goal against Juventus in 2018.

With such heated debates taking place for years over who is greater between Ronaldo and Messi, the club where Messi grew and became the superstar we see today were clearly unhappy that one of their youth players prefers the Portuguese striker, and even censored his celebration.

Cutting off the clip of the goal on their Instagram before Lopez pulled off the iconic jump and “siuu” has led to fans pointing out the eagerness of Barcelona to feature any Ronaldo-related content, whilst Madridstas are ecstatic that the next generation of La Masia talent clearly grew up watching Ronaldo in his prime.

Here’s the clip with the full celebration included. Ronaldo would have been proud of this one.

The influence is unreal. 🐐pic.twitter.com/rhTVZNL0cf