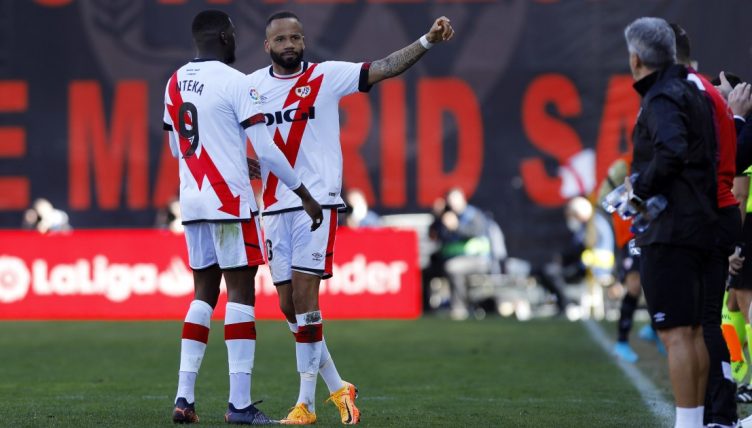 Manchester United transfer flop Bebe has scored another screamer for Rayo Vallecano, this time against Sevilla in their 1-1 draw in La Liga.

It came immediately after the break, with Rayo and their opponents Sevilla drawing at 0-0.

Bebe received a long ball down the right wing after evading his marker Ludwig Augustinsson and chopping back onto his left.

He then managed to shrug the swiss wingback onto the floor.

Turning quickly on to his right, he unleashed a thunderous effort from an incredibly tight angle.

It caught Sevilla’s ‘keeper Yassine Bounou completely off guard and the ball flew past him into the net at the near post.

It was a stunning effort, and the Rayo fans behind the goal celebrated wildly.

Bebe himself ran over to the executive boxes, presumably pointing and waving at his family.

Bebe has had a long journeyman career, but since 2018 has made Rayo his home.

He has become a much-loved part of the furniture at Madrid’s ‘third’ club.

Bebe has also become renowned for his ability to score screamers.

Notably, he scored a stunning freekick in the recent semi-final loss to Real Betis in the Copa del Rey.

Bebe signed for Manchester United in 2010 as a youngster and was seen as a de-facto replacement for Cristiano Ronaldo.

However, he only made two appearances for the club before he was sent on a variety of loans and eventually left for Benfica in 2014.

Bebe struggled there too and was once again subjected to a series of loans, but with Rayo he has found a home.

He twice helped them to promotion to La Liga: first in 2017-18 during a loan deal from Eibar which became permanent, and then again last season.

Rayo seem likely to stay up this season, with Bebe and fellow-former United flop Radamel Falcao playing a big role in helping them do so.

The Rayo Vallecano man catches Bono out as he smashes one in from a really tight angle to open the scoring against Sevilla 😮 pic.twitter.com/o9D43O55Dx