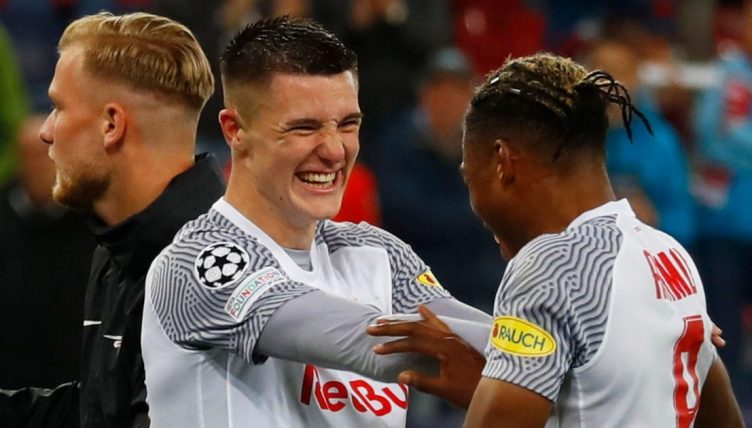 United need a new striker as Edinson Cavani left at the end of last season and there is still a lot of uncertainty surrounding Cristiano Ronaldo’s future.

Sesko is currently United’s top No.9 target and scored 10 goals in 36 appearances for Salzburg last season. He’s since followed that up with two goals in three games at the start of 2022-23.

The 19-year-old, who has been compared to Erling Haaland, recently starred in a friendly against Liverpool and scored the only goal of the game before bewitching both James Milner and Curtis Jones with a sensational piece of skill.

According to reports, United football director John Murtough spoke to his agent about the possibility of a transfer, but Elvis Basanovic has previously outlined the plan for his client.

“I think it’s normal for the best clubs to follow the best talents and I think he is one of the best talents in the world at his age,” he told AS in October 2021. “But as I said before, he is just starting his career and we are going step by step.

“Talent is not enough to make a great career and right now he has everything he needs to progress at Red Bull Salzburg. I think he will stay here for the next two or three years. We don’t need to rush for anything.”

But that hasn’t deterred United, who are still looking to add the Slovenia international to their squad in the next few weeks.

During a video on his YouTube Channel, Romano admitted that Salzburg don’t want to sell Sesko but also reiterated just how highly United rate him.

“I told you earlier in the week that Manchester United are really keen on this boy,” he said. “They consider him a top talent and they have had some contacts on [the] agent’s side and on [the] club side with Salzburg to understand the situation around Sesko.

“It’s not an easy deal because Salzburg’s plan is to sell the player in the summer of 2023 and not this summer. But Man Utd are exploring the possibility for this summer so they want to anticipate the many other clubs interested in Sesko.

“At the moment, there’s still no official bid because they are trying to understand what will happen with Cristiano Ronaldo. We know that they are keen on keeping Anthony Martial at the club but let’s see what happens if Cristiano stays at Manchester United.