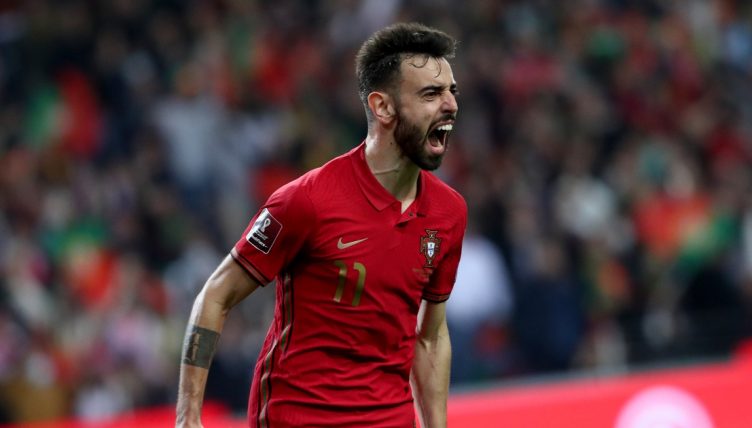 Portugal need to do what European champions Italy failed to do last week and beat relative minnows North Macedonia in their play-off.

Ronaldo and Fernandes featured last week as Portugal beat Turkey in a nervy 3-1 to set up a winner-takes-all clash with the giant-killing Macedonians.

Just as they did against Italy, North Macedonia looked set up to frustrate the hosts – but Portugal’s nerves were settled as Ronaldo assisted his Manchester United team-mate Fernandes in the 32nd minute.

It was a moment of quality, too, as the veteran goalscorer played in Fernandes with a cheeky nutmeg pass. Who says they can’t play together?

“Growing up, everyone knows Cristiano was my favourite player,” Fernandes told GOAL in 2020.

“I think it was a little bit of everything. When Cristiano began to take his first steps in the national team, it was in the Euros in our home country [Euro 2004], so I was nine years old.

“That year stays with everyone because we lost the final in Portugal, we saw him crying after the final, he was a young boy who was starting to shine and from there I started to watch him.

“It wasn’t because he plays in my position as that wasn’t the case, but it was the way he worked every day, the mentality he had, the capacity he had to give 100 per cent in every game at a high level, for me it was like a motivation, like you always have to do better.”

The World Cup in Qatar is likely 37-year-old Ronaldo’s last – having featured in all of Portugal’s major tournament appearances since he burst onto the scene when they hosted Euro 2004. But first they need to see the job through against North Macedonia.

Fernandes later took Portugal another step closer with another goal on the counter in the 64th minute.