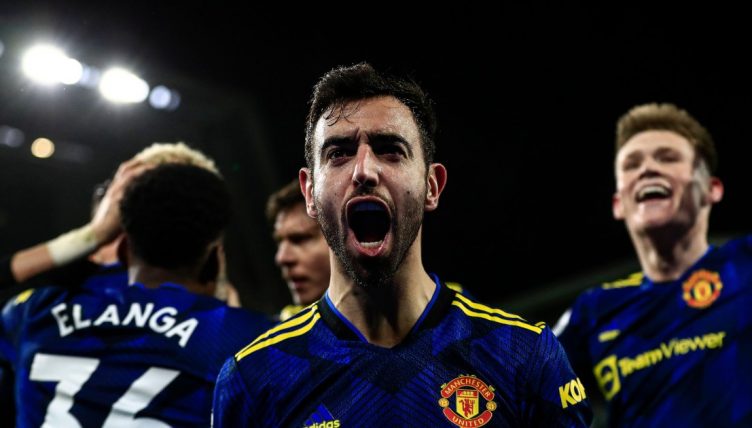 Manchester United player Bruno Fernandes was videoed angrily ranting at Fred and Alex Telles. Filmed earlier in the season, the video shows Fernandes fuming with his team-mates as he went into training while they hung around outside.

Telles was followed that day by a camera from a Brazilian marketing agency, and the leaked footage shows Fernandes being totally unimpressed by the attitude of his two team-mates who were filming before training.

“Stop being such ‘ballers!” he shouted across the car park. “You are here to play football, not film it. Film my dick.”

Fred and Telles could then be heard responding bemusedly to the situation, with Telles saying Fernandes should calm down.

The video has caused a storm on social media, providing further evidence that Fernandes is as passionate in the dressing room as he is on the pitch.

“I think it’s something natural in me,” Fernandes once said to the Manchester United website about leadership.

“I don’t do anything like saying ‘I want to be a leader or I want to do things in a different way to someone,’ it’s the natural way I have. It’s something that’s in my game.

“Sometimes you have to improve also on this because you need leadership from different players in different modes.

“For me, the point is helping everyone with my voice when I can and also with my energy and everything I do in the game to help the team.

Manchester United had an awful season in 2021-22, with the team performing poorly on the pitch and news from the dressing being constantly leaked.

Fernandes himself also had a poor season in comparison to the standard he had set in his previous year and a half in Manchester.

But with new manager Erik ten Hag now in place, there is some expectation of improvement.

Had never seen this clip of Bruno Fernandes shouting at Fred and Alex Telles 😂 pic.twitter.com/TAsL0ZRBXk