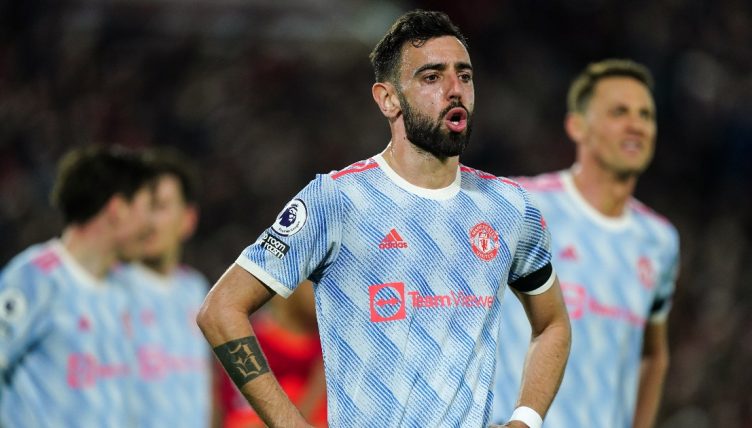 Bruno Fernandes earned himself a yellow card for a late challenge on Trent Alexander-Arnold in the closing stages of Manchester United’s 4-0 Premier League romping at the hands of Liverpool.

Clearly borne out of frustration with how the game had played out, Fernandes went in late on the Liverpool right-back and effectively kicked after he had already got rid of the ball. On another day, the decision could have been a red card and further added to United’s woes.

It was a devastating result for United, the result of an embarrassing performance against their rivals who are in the running for all three of the FA Cup Premier League, and Champions League to add to their League Cup earned earlier in the season.

United, meanwhile, are out of the running in all competitions and are unlikely to get top four.

“Jurgen [Klopp] came six years ago and if you compare the squad he inherited, he came after eight or nine games and finished eighth, this is roundabout where we are currently,” interim manager Ralf Ragnick said after the match.

“He had a point average of that season of 1.6 but with every transfer window after that, they develop the kind of squad we have today.

“I am not blaming anyone, not my players nor anyone else, but we just have to realise what kind of squad they had available.

“Look at their bench, look at the four players who weren’t even in the squad: Roberto Firmino was the only one who was injured.

“This shows what kind of quality and team they have built together working with Jurgen and his team for the last six years.

“Any owner, if you analyse, the team needs a rebuild – contracts are expiring. It’s clear for me there will be six, eight, 10 new players.

“And before you sign them you need to be aware of what football does the new manager wants and then fit into that profile.”