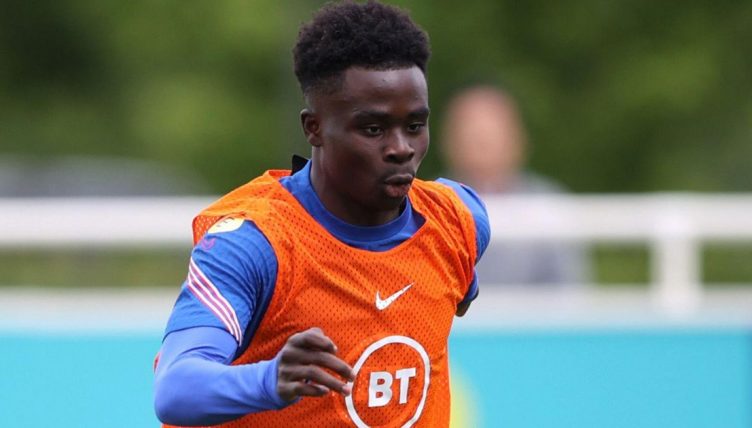 Bukayo Saka is a special talent and the Arsenal man was showing off his skills in England training over the weekend, dribbling past Liverpool’s Trent Alexander-Arnold and Manchester City’s Kyle Walker before scoring a fine goal.

Saka made won his first England cap in October 2020 in a 3-0 victory over Wales and has since made himself a fixture of Gareth Southgate’s squads, valued for both his workrate and skill.

The 21-year-old Arsenal player was most recently called up for the four Nations League fixtures in June.

He came off the bench to replace James Justin in the first of those four games, against Hungary in Budapest on Saturday, but he could not make enough of an impact to stop England from falling to a 1-0 defeat.

Still, Saka has been impressing in training and one of his latest bits of skill was caught on camera by the England media team.

Playing in a small-sided game, Saka picked the ball up on the right of the pitch, before performing his trademark cut inside onto his left foot.

He left Trent Alexander-Arnold trailing in his wake – and the Liverpool man was unable to stop him even by climbing all over Saka’s back.

The Arsenal academy graduate then accelerated past another of England’s vast collection of competent right-backs, Kyle Walker, before slotting the ball coolly into the goal.

Southgate is clearly a fan and in September 2021, after Saka’s first England apperance following his penalty miss in the Euro 2020 final shootout, the England boss said: “He will I’m sure have gained a lot of confidence and heart from the reception he got before the game.

“We think he’s a super player… the way he’s progressed and the maturity he’s played with and the talent that he has, he is a hugely exciting player.

With moments like the one he produced in training over the weekend, Southgate’s admiration will only grow.

Nothing to see here. Just Bukayo Saka dribbling past Trent Alexander-Arnold AND Kyle Walker before scoring.