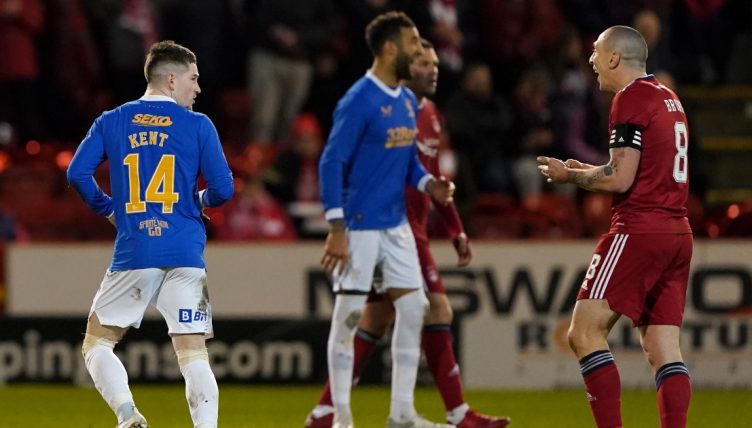 You can take the man out of Celtic but you can never take Celtic out of the man – as Aberdeen midfielder Scott Brown demonstrated during their 1-1 draw with Rangers on Tuesday.

Brown, who spent 14 years at Celtic, lapped up the red hot atmosphere at Pittodrie as his new side held the Premiership leaders to a draw.

And the midfielder saw all his Christmases come at once when long-term foe Ryan Kent was sent-off for Rangers in the game’s closing stages.

Kent famously received a retrospective two-game ban for whacking the former Celtic skipper back in April 2019 – speaking for half of Scotland in the process.

And the winger flew into a challenge on Brown to pick up his second yellow card, even if contact seemed minimal on this occasion.

Kent had a few words to say to Brown as he approached the Aberdeen skipper as he walked to the tunnel.

But that didn’t deter Brown, who smirked and waved Kent off the pitch as the home crowd cheered him on.

There’s nothing Brown loves more than winding up Rangers’ players and he clearly revelled in Kent’s dismissal.

Despite his advancing age, the midfielder has clearly lost none of his shithouse tendencies.

Scott Brown waving Ryan Kent off after his red card.

Even in an Aberdeen shirt, his sh*thousery towards Rangers remains consistent as ever. pic.twitter.com/UozJH2IV85