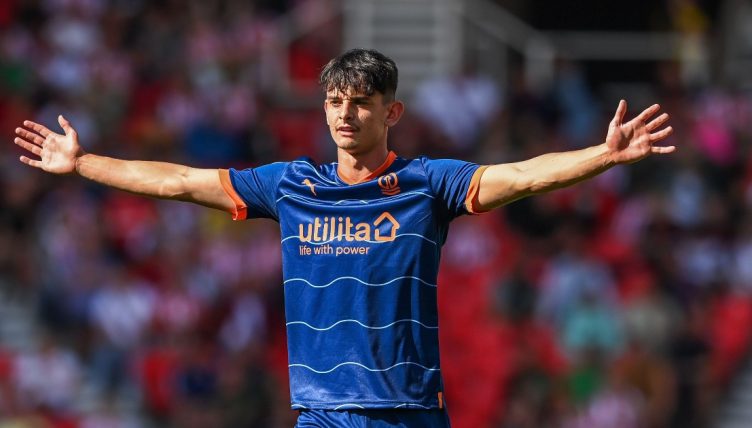 Arsenal starlet Charlie Patino showed why he’s so highly rated with a man-of-the-match display on his full debut for Blackpool.

Michael Appleton’s Tangerines confirmed the season-long loan of the 18-year-old rising star last week and gave him his first appearance at the weekend, as a 20-minute substitute in a 2-0 defeat away to Stoke City in the Championship.

Patino was subsequently given his first start for Blackpool on Tuesday evening in a League Cup clash at home to League Two side Barrow.

Blackpool were eliminated from the cup at the first round by their lower-league opponents, losing on penalties after a goalless draw, but the evening wasn’t without some positives.

He played 70 minutes and was a lively presence. Only the two Blackpool centre-halves, who completed the full game, registered more touches of the ball. Patino also completed 52 passes with an 83% accuracy and wasn’t afraid to get stuck in, making four tackles – the most of any player on the pitch.

“A beautiful moment,” Mikel Arteta said after Patino scored on his debut for his parent club in the same competition against Sunderland last December.

“He is a kid that is coming through our system, a lovely kid. He is training with us almost every week. It was a dream. As a debut to come here, to score in front of our fans, a really special moment.

“I think that is very positive [that the fans were singing his name]. They heard about him and know what he can become and now we have to cook him slowly. Today was a good start, I think.

“[Too much hype around him] is what we have to avoid. He still has a lot of competition in front of him. He is really young. And he needs to go step by step. Today he was lucky, he got the opportunity and he took it really well.”

“I thought he did alright, I thought he was good. A little bit too deep in the first half, I tried to get him higher up the pitch in the second half, he’s more than capable of playing that deeper role but obviously with Kenny (Dougall) in there we had the security so we didn’t really need him,” Blackpool boss Appleton told reporters after the match.

“I think the fans have taken to him already, they’ve obviously got a couple of songs about him – I’ve heard one of them. Listen, he’ll be great, he’s got good ability and as long as he learns to use his touches at the right time and doesn’t take too many touches then he’ll learn quickly and he’ll get better and better.”