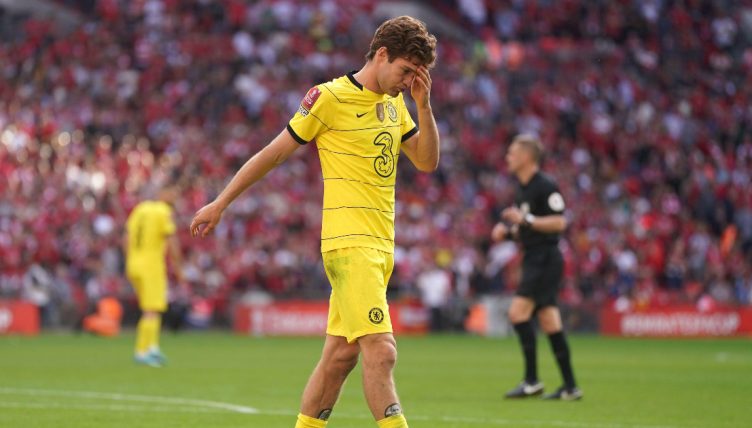 Marcos Alonso has been known for his pile-drivers on his left foot throughout his Chelsea career, and at the start of the second half of their FA Cup final against Liverpool, he nearly gave his side the lead with a free-kick from a tight angle which rattled the crossbar.

Luis Diaz fouled Reece James which led to the free-kick, and with the Chelsea centre-backs coming forward, the expectation was that Alonso would cross.

However, the Spaniard opted to shoot and nearly caught Alisson out, with a powerful shot that beat the keeper, but cannoned back off the bar, much to Liverpool’s relief.

The first half had ended 0-0, with both sides having decent chances to open the scoring, and Mohamed Salah coming off injured for Liverpool at Wembley.

Alonso joined Chelsea in 2016 and whilst his performances have been somewhat inconsistent, particularly in a defensive sense, he has contributed to 28 goals and 23 assists from the left side of defence or midfield in 210 games.

He once had a falling out with Frank Lampard at half-time, and there were rumours that a similar bust-up with Thomas Tuchel had occurred after the 31-year-old was substituted off at half-time during Chelsea’s recent draw with Wolves.

However, Tuchel denied any claims of an incident, and Alonso was picked to start the Cup final.

[Tuchel when asked if their on-pitch argument was resolved] “Yeah for sure. Absolutely yes. It started and ended in the first half and was not continued at half-time and nothing else.

“It was not continued at half-time and things are solved. That happens.

“The physical input was almost too high in some situations where we even attacked with the defenders, we were very, very high up the pitch and left open spaces for counter-attacks.

😯 Almost the perfect start to the second half for @ChelseaFC…