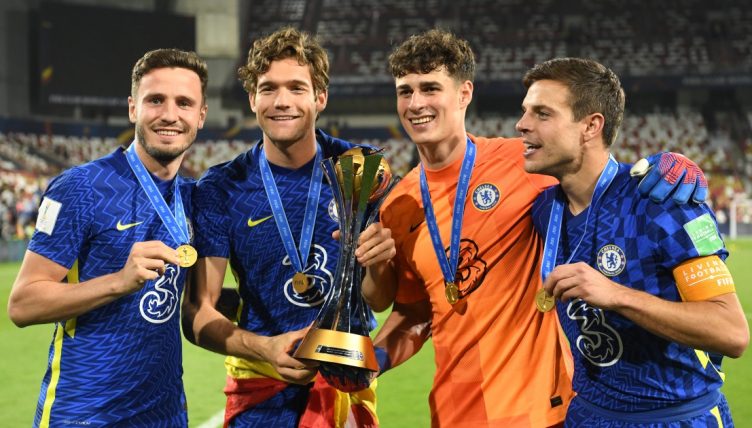 Chelsea recently won the trophy by beating Palmeiras in the final, with Kai Havertz scoring a late winner from the penalty spot.

And the club decided to show off their latest piece of silverware before their Champions League match against Lille.

Thomas Tuchel’s side beat their French opponents 2-0 through goals by Havertz and Christian Pulisic – but the most memorable moment from the night came during the pre-kick-off trophy presentation.

Chilwell, who looks set to miss the rest of the season, was among the Chelsea players to show off the club’s newest trophy but he was met with a surprise as the sprinklers turned on during the celebration.

Luckily, the three Chelsea players saw the funny side of their inadvertent shower and laughed off their misfortune.

Their victory in Abu Dhabi meant that Chelsea have now won every possible trophy under the ownership of Roman Abramovich and Petr Cech recent praised club captain Cesar Azpilicueta.

“Azpi has now won everything, and that is an amazing achievement. All the credit goes to him,” Cech told Chelsea’s official website.

“When he arrived in 2012, he came first to compete for his spot. He had a long-term injury the year before, so he had had a difficult time before he came to us. He had to start from scratch fighting for his place.

“He is one of those players who never disappoints you. He works hard, he does everything. He is an honest player on the pitch, and off the pitch he works hard.”

Ethan Ampadu: Battling at Venezia to be Chelsea’s Rudiger replacement