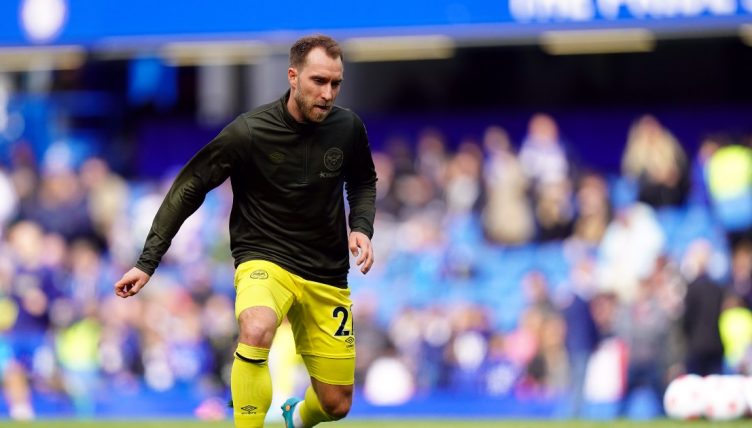 Christian Eriksen scored an emotional goal for Brentford against Chelsea in their Premier League clash, his first in club football since his shocking collapse at Euro 2020.

It put Brentford 2-1 up against the Champions League holders, who ended up losing 4-1 to their cross-City rivals.

Eriksen’s goal was a simple tap-in after an impressive breakaway by Brentford, but it was a huge goal both for his club and himself personally.

Bryan Mbuemo was played in behind with the Chelsea defence struggling to reorganise themselves, allowing Eriksen to run through the middle of the pitch and into the box.

Mbuemo was able to then find his teammate, who fired the ball into the net whilst falling over from the pressure applied by the Chelsea goalkeeper.

He got off the floor with a huge smile on his face, before running over to the Brentford fans where he was mobbed by his teammates in joyous scenes.

Chelsea had taken the lead via a stunning Antonio Rudiger striker just after half-time in the 48th minute. The German international hit it from a huge distance outside the box, the ball curling away from the goal before hitting the inside of the post and bouncing in.

But just two minutes later Vitaly Janelt drew the away side level, himself firing powerfully from just outside the box.

He also scored the third, lifting the ball over Edouard Mendy in the Chelsea net who had gone to the ground.

Then, with the clock kicking towards the 90th minute, Yoane Wissa fired emphatically past Mendy following a freekick to confirm the extraordinary result.

Eriksen has been impressive since his return to football after his horrifying collapse at Euro 2020 last summer. He has scored three goals and assisted once in his last four games for both Brentford and Denmark, with whom he returned to international duty last week.

“For me, it was not a gamble,” Brentford manager Thomas Frank said of bringing Eriksen to the club.

“I was convinced he could help us and that he could be the best signing ever for Brentford.”