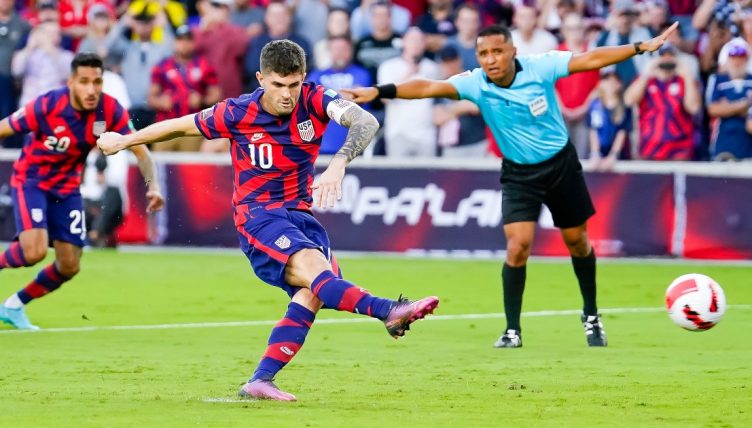 Chelsea winger Christian Pulisic attempted to dance by doing the worm after scoring against Panama during the USA’s 5-1 victory that all but ensured their passage to the 2022 World Cup in Qatar.

Pulisic scored a hat-trick for the US on the night, with their victory moving them to the brink of qualification for the World Cup later this year.

The Blues attacker tried to pull off the worm after he converted his second of the game in added time of the first half.

It put the US 4-0 up just before halftime, and he ran over to the sideline to celebrate with the fans.

He attempted the famous dance move, although much like his recent attempt at the Griddy it was more evidence of why he’s a footballer and not a dancer.

Pulisic had scored his first from the spot as well, firing past the Panama goalkeeper for the match’s opening goal in the 17th minute.

The US captain completed his hat-trick in the 65th with a good finish.

He received the ball in the box before turning his marker, taking a touch past another defender, and firing home.

The US have not officially qualified for the World Cup, but their 5-1 win means they have all but secured their spot in Qatar.

They face Costa Rica in their final game, who sit fourth and could match the US’ points tally in second by defeating Pulisic and co.

However, the US’ goal difference is vastly superior and they would have to lose by more than five for Costa Rica to finish above them.

The top three from CONCACAF qualifying make it to the World Cup, and Canada has already qualified.