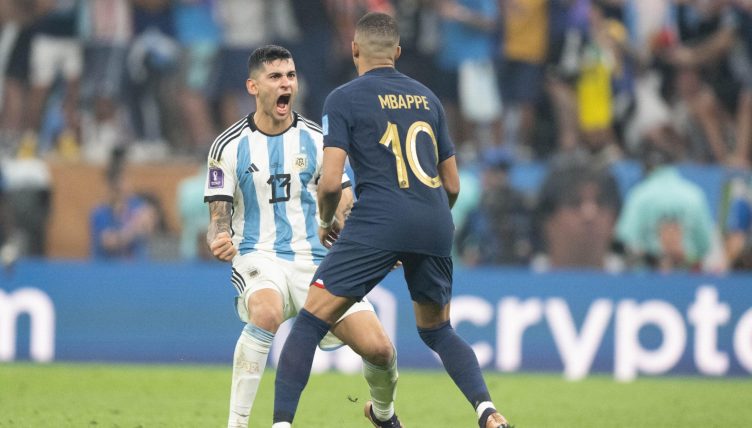 Eagle-eyed viewers of the World Cup final between Argentina and France couldn’t get enough of the moment Cristian Romero made hat-trick hero Kylian Mbappe jump out of his skin – and neither can we.

Romero started the match on Sunday and played a crucial role in helping Argentina secure their third World Cup triumph.

“I thought Romero controlled himself because he has got that Argentinian ‘no-one bleeping passes, if you go past me, then I am fouling you’.”

Spurs expert John Wenham, who regularly breaks news about the club Romero plays for on his Lilywhite Rose social media channels, believes the defender’s valuation will skyrocket after his World Cup success.

“I think, talking about this objectively, from Tottenham’s point of view, thinking about marketing and image rights value of a player, they would prefer Romero to win [the World Cup],” Wenham told Football Insider correspondent Ben Wild.

“But from a purely financial, marketing point of view, Tottenham will be glad Romero has won it because, as I say, it just raises his value in every aspect.”

Even so, the Argentina defender’s most memorable contribution came when frightening the life out of Mbappe while celebrating a goal.

Running up to the PSG forward, Romero screamed in his face and watched his opponent almost soil himself on the pitch. Pretty funny, we’d say.

Romero will now return to Tottenham to help their push for Champions League qualification under Antonio Conte.

He is a mad man.pic.twitter.com/Rw41uwoFUq

READ NEXT: A definitive ranking of every World Cup since 1990 from worst to best