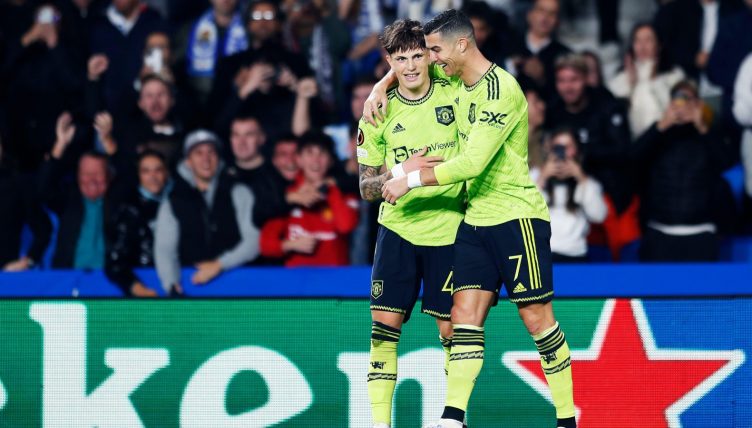 Alejandro Garnacho asked Cristiano Ronaldo for his permission to perform his new ‘napping’ celebration after scoring his first goal for Manchester United.

Garnacho scored a memorable strike to give United a 1-0 win over Real Sociedad in their final Europa League group game – although it wasn’t enough for Erik ten Hag’s side to finish top of the group and avoid a play-off against a Champions League drop-out.

The 18-year-old will always remember his first goal for the club given how it was his ‘idol’ Ronaldo that put him through on goal, capping off a dream moment in his young career.

As he celebrated with his United team-mates, Garnacho was seen asking Ronaldo if he could use his new celebration while gesturing it to the 37-year-old legend.

The heartwarming moment made Ronaldo laugh, before he patted Garnacho on the head and granted him his wish. A moment later, the young forward pulled away from his United team-mates and could be seen paying tribute to the five-time Ballon d’Or winner.

Garnacho took to social media after the game to thank Ronaldo for his part in making it a night he’d never forget. Garnacho tweeted: ’18 years and 125 days dreaming of this moment. Thanks Idol, @Cristiano’.

Speaking on BT Sport at half-time, both Owen Hargreaves and Paul Scholes credited him with being United’s best player in another encouraging performance.

“That second touch really makes the goal, he gets it out of his feet and slides it into the top corner. I think he’s been far and away the biggest attacking threat on the pitch. I don’t think the keeper covers himself in glory, but it’s a lovely finish.”

And Hargreaves added: “That’s the great thing about young kids, they play with a real enthusiasm. Every time he touches it he runs forward, the first touch is amazing. It is great to see him mentored by Cristiano [Ronaldo].

“He’s a really good player and it’s nice to see him performing on the biggest stage.”

The veteran gave the go ahead 🫱🫲#UEL pic.twitter.com/CEY2nG2Y5G