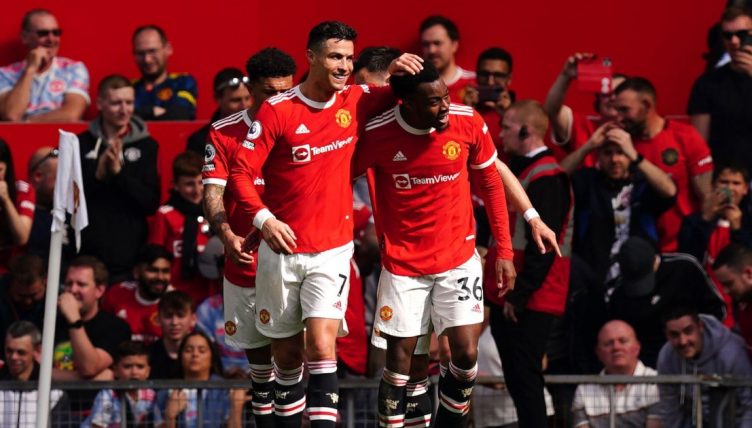 Cristiano Ronaldo brilliantly asked Anthony Elanga to join in with his iconic ‘Siu’ celebration after the young Manchester United player assisted the Portuguese star to put United 1-0 ahead of Norwich in their Premier League match.

Ronaldo ran straight over to Elanga after scoring, bringing the Swedish international with him over to the corner flag where he encouraged him to join in with the celebration.

As Ronaldo went up, so did Elanga, both bringing their arms down as the crowd yelled out “siu.”

It was as easy a goal as Ronaldo has ever scored, Elanga making the goal virtually by himself. He pressed Norwich defender Ben Gibson, knicking the ball from him before playing the ball across the goal to Ronaldo who tapped home to give United the lead.

Ronaldo then scored a second later on, heading home an Alex Telles corner, before Norwich pulled one back just before half-time.

Elanga’s assist was another great moment for the youngster who has had a breakout campaign in 2021-22, coming out of United’s youth academy to establish himself in the first team.

“He is playing as if a dream comes true,” United interim manager Ralf Ragnick has said.

“He is just a joy and it’s fun to watch him play.

“I wish a few other players would take him as an example, or almost as a role model I would say, not because he is doing everything right, but because he’s just enjoying himself on the pitch and that’s what it’s all about.

“Football is an important sport and even more so for our supporters or for the media, but it’s still a ball game and you have to enjoy yourself on the pitch.”