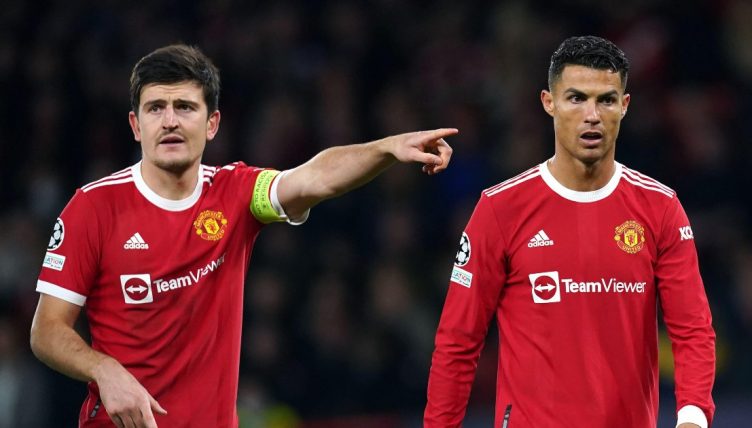 Cristiano Ronaldo’s arrival in the Manchester United tunnel ahead of their Premier League match against Norwich caused Harry Maguire to do a little jump after he had previously been stood chatting.

Ronaldo scored a hat-trick to help United win 3-2, despite the fact the side gave up a 2-0 lead against bottom-of-the-table Norwich.

Maguire had been chatting to fourth official Jonathan Moss in the tunnel when Ronaldo appeared.

The Portuguese striker gave all his team-mates a handshake, and as he got closer to Maguire the England international noticed him and stopped talking.

The Manchester United captain did a couple of little jumps, almost as if to show Ronaldo he was ready for the game, while the Portuguese star had a brief chat with David de Gea.

Ronaldo and Maguire then shared a handshake before the former went to his place in the line.

Ronaldo’s hat-trick was the 60th of his career, the most anyone has scored in the history of the game.

His first was a simple tap-in after Anthony Elanga had stolen the ball from a Norwich defender and played it across to Ronaldo, while his second was a powerful header from a corner.

Yet by the 52nd minute, the match was tied again at 2-2 after poor defending from the home side. In the end, United needed Ronaldo to score a stunning 76th-minute free-kick to win the match.

United face Liverpool next, and interim manager Ralf Ragnick was brutally honest about his side’s chance against their rivals after their performance against Norwich.

“If we play like we played today, it will be very, very difficult to get even a point out of this game [Liverpool] and this is what we have to be realistically aware of,” he said.

“We need to raise our own level and standard.”