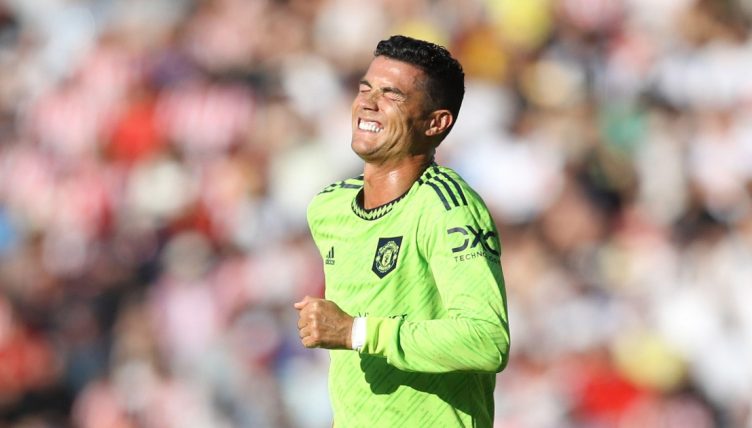 Manchester United fans were left shell-shocked after their side’s first-half performance at Brentford on Saturday with Cristiano Ronaldo reflecting their frustrations by throwing his arms in despair.

United found themselves 4-0 down after 35 minutes at the Brentford Community Stadium after a stunning first-half display from the hosts.

It took just 10 minutes for Ten Hag’s side to fall behind after Josh Dasilva’s strike from range squirmed through a diving David de Gea, and the lead was doubled just eight minutes later by Mathias Jensen, who pounced on a defensive error.

As Ronaldo watched the lime-green bonfire that was masquerading as the Manchester United side,  it was possible to see the immense frustration etched over the 37-year-old’s face as he tried to come to terms with what was happening.

And he attempted to rally his team-mates by throwing his hands around in a passionate manner.

It didn’t work. The hosts then went four up after further goals from Ben Mee on 30 minutes and Bryan Mbeumo after 35 minutes, both of which teed up by Ivan Toney, as the Bees set the groundwork for one of the most famous wins in their history.

Commentating for the game on Sky Sports, Gary Neville shared the frustration of his former team-mate.

“Last Sunday didn’t surprise me,” Neville said. “I thought they would do better today away from Old Trafford… But they have been mauled. Bullied. Messed around with like you wouldn’t believe in this first half hour.”