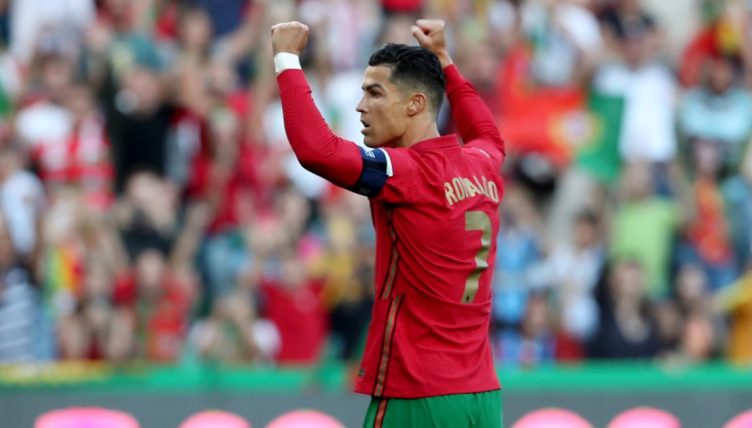 Manchester United’s Cristiano Ronaldo extended his lead as the all-time top goalscorer in the history of international football with two goals in Portugal’s 4-0 UEFA Nations League victory against Switzerland.

On a night where Ronaldo’s long-time rival Lionel Messi scored FIVE goals for Argentina, 37-year-old Ronaldo served a reminder that he too still has plenty to offer.

Switzerland thought they’d taken an early lead at the Estadio Jose Alvalade in Lisbon but Haris Seferovic’s goal was chalked off due to handball. The hosts responded by opening the scoring in the 15th minute, with Real Betis midfielder William Carvalho tapping home after Swiss keeper Gregor Kobel parried out Ronaldo’s free-kick.

It didn’t take long for Ronaldo to get on the scoresheet himself, showing his remarkably clinical ability in the box with Portugal’s second and third in the 35th and 39th minute.

Ronaldo thought he completed his hat-trick early in the second half, but a VAR check ruled out his 51st-minute effort due to offside.

It will be interesting to see what’s next for Ronaldo amid the arrival of a new manager at Old Trafford this summer. His return to Manchester United hasn’t quite gone as planned, with 2021-22 proving a trophyless disappointment.

But Ronaldo did score a respectable 24 goals for the ailing Red Devils, and won the club’s Sir Matt Busby Player of the Season award.

“I know he [Erik ten Hag] did a fantastic job for Ajax and that he’s an experienced coach. But we need to give him time and things need to change – the way he wants,” Ronaldo said in an interview on the arrival of Dutch,” Ronaldo said in a recent interview while away on international duty.