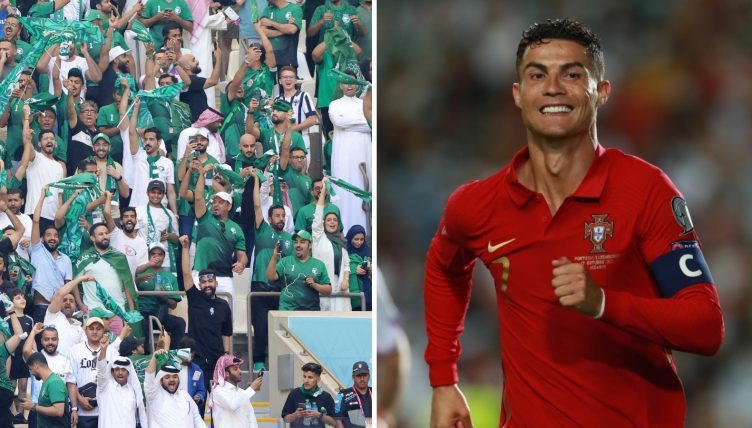 Messi opened the scoring for firm favourites Argentina with a penalty in the 10th minute. The South American side went on to dominate the first half, and no fewer than three goals disallowed before the break – as Saudi Arabia’s brave but risky high defensive line worked a treat.

Those fine margins – which saw Messi and Lautaro Martinez have goals chalked off – ultimately proved costly, as Saudi Arabia roared back and scored two goals in the early stages of the second half.

Argentina then toiled but had no answer to the stout and well-organised defending from Herve Renard’s underdogs.

“People would have needed to get up early for this game in Argentina, around 7am. What a cruel thing to do to them over breakfast,” noted the BBC’s South American football expert Tim Vickery on BBC Radio 5Live.

“I quite liked the first half of Saudi Arabia. Argentina’s biggest fear happened because they weren’t able to dominate the ball in midfield and have their circuit of passes. The high line of Saudi was risky but it gave them the platform to create problems.

“Argentina’s defensive stats have been brilliant but there were times in the first half where they were defending at full stretch. Romero was the weak link today. They lose their structure when they went behind. They looked like more of the shambolic Argentina sides of old where Lionel Messi was dropping deep to get the ball.”

The South American champions went into their World Cup opener as one of the favourites to win the tournament, having enjoyed a brilliant 36-match unbeaten run. But now their place in the knockout stages is in serious doubt, with huge pressure on their next two group-stage matches against Mexico and Poland.

Saudi Arabia are ranked below hosts Qatar in the FIFA world rankings – 53rd. Their shock win was cheered on by thousands of Saudi fans, who made the trip across the border for the World Cup clash.

“The fans are going mental. This result will go down in the history of Saudi Arabia and then some. I’ve just spoke to one and asked what will this result mean for these players and he said “they will get everything”. That means quite a lot when you’re talking about Saudi Arabia,” New York Times reporter Tariq Panja told BBC Radio 5 Live.

“The Saudis are the nearest country to the World Cup and a lot just drive over. It was three hours for one fan, 90 minutes for another fan. They’ve got a really big football culture, I don’t think we realise that in Europe. The fandom is certainly there and it was there in full effect today. They completely drowned out the Argentina fans.”

The Saudi Arabian fans were certainly in fine voice after the win, grouping together and doing an impression of Ronaldo’s famous celebration as they soaked in one of the biggest and best wins in their national team’s history.