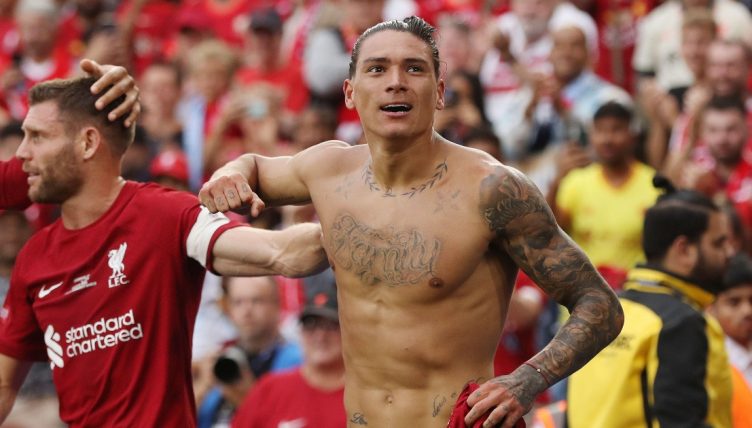 Liverpool’s Darwin Nunez couldn’t hide his delight after scoring against Manchester City on his official debut for the Reds.

Nunez shot to prominence during the 2021-22 season after scoring 34 goals in 41 appearances in all competitions for Benfica.

The striker was linked with a move to Manchester United but ultimately joined Liverpool in a deal that could potentially be worth €100million.

He then had a difficult start to his first pre-season with the Reds and was mocked on social media after missing some gilt-edged opportunities.

The Uruguay international managed to silence his critics with a stunning performance against RB Leipzig, scoring four goals in the space of 45 minutes.

But he then had another forgettable performance in their friendly against RB Salzburg and was named on the bench for the Community Shield game against City.

City substitute Julian Alvarez netted the equaliser and the game looked set to go to a penalty shoot-out. But Nunez produced a brilliant cameo performance and won a late penalty which Mohamed Salah converted to put Liverpool 2-1 up.

The 23-year-old then got on the scoresheet in injury time, stooping low to head the ball past Ederson from close range.

After finding the back of the net, he whipped off his shirt and celebrated wildly in front of the travelling Liverpool fans. The striker also tapped the Liverpool badge on his shirt before being booked by the referee.

“He was good, really good,” Jurgen Klopp said when asked about Nunez after the game. “It was clear that he will get better with time, everybody gets judged on first sight, that is not helpful to anyone but it happens.

“Both teams were not at 100 per cent at their physical usual situation but in the first few games we are not even close to the fitness levels today and after the third ball he was completely killed and everyone judges that.

“It’s just a joke but we have to live with that, he will deal with it brilliantly. We are patient and we know he can do good stuff.

“I liked his impact and the impact from the bench was exceptional. Everyone who came on was important. Good game, we came back in the game and City had to run a lot and we finished the game off with nice goals. A good watch. Both teams used and that is what we could have expected.”