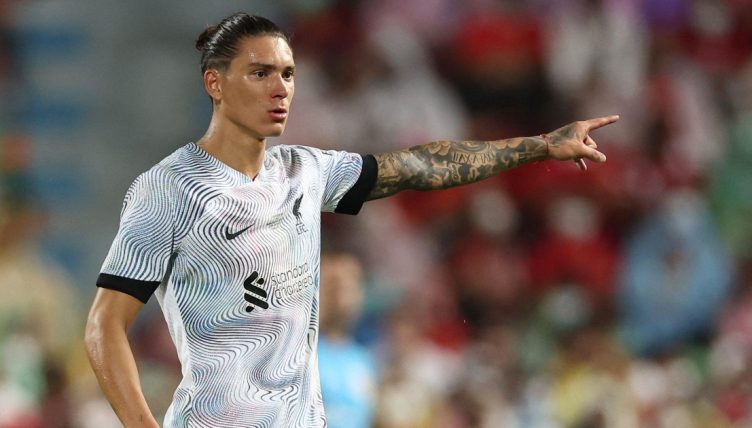 Nunez joined Liverpool for a club-record deal worth up to €100million earlier this summer after scoring 34 goals in 41 appearances for Benfica last season.

But he had an unofficial debut to forget after coming off the bench in their pre-season friendly defeat against Manchester United in Thailand.

The Uruguay international spurned a golden opportunity to net his first goal for the Reds, blazing over from close range after a Mohamed Salah effort hit the post.

Nunez was then mocked by rival fans on social media but Liverpool boss Jurgen Klopp didn’t have any concerns.

“The only real important thing is how I judge the situation for the player and I couldn’t be more calm – completely convinced about his potential,” Klopp told reporters.

“And actually, what our people – all Liverpool supporters in the whole world – should know is that new players need time and get time.

“We should be the first ones to delete the fee we paid [from our thinking]. Just delete it – it’s not important.

“It’s like this with strikers. He missed a chance and then there are some nervous people going, ‘oh my god, he missed a chance’ — I can promise you it will not be the last.”

Nunez also failed to score in the 2-0 win over Crystal Palace but made an immediate impact after coming off the bench against RB Leipzig.

Liverpool were already leading 1-0 through Mohamed Salah’s first-half goal before Nunez doubled their lead from the penalty spot in the 48th minute.

The 23-year-old scored again three minutes later after being set through on goal by Salah and cooly firing past the RB Leipzig goalkeeper.

He then completed his hat-trick in the 68th minute, meeting Harvey Elliott’s cross and tapping home from close range.

Time to enjoy @Darwinn99's first-ever hat-trick for the Reds ⚽⚽⚽ pic.twitter.com/vztvgVwHzx