Watch: Liverpool’s Darwin Nunez gets sent off after violent headbutt 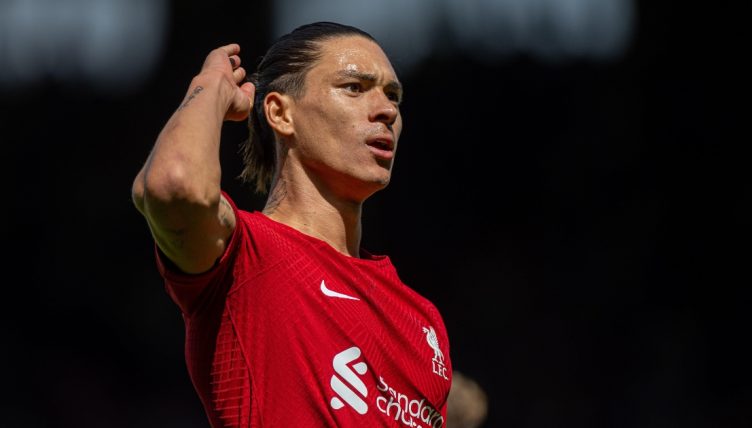 Liverpool striker Darwin Nunez had a disastrous home debut at Anfield as he was shown a straight red card against Crystal Palace.

Nunez, who scored 34 goals in 41 appearances for Benfica last season, joined Liverpool in a deal that could ultimately be worth £85million.

The striker was criticised following some of his early pre-season performances but Liverpool manager Jurgen Klopp has complete faith in him.

“Five weeks ago, when we started pre-season and he had his first game and it didn’t look great from the outside world,” Klopp recently told Soccer Saturday. “Not for us, but it’s crazy how quick we judge people… wow!

“Imagine if somebody did that to us and said, ‘First day of work, it didn’t work out. Go home, we never want to see you again! And you don’t get a second chance by the way’ – we would have all been long gone! No chance.

“Everybody can now see, ‘Ah he’s a proper striker’ – so good for us and good for him. He’s a handful and is a different type to what we had. He’s very lively and very energetic. Physically he’s really strong and technically he’s really good, that obviously goes together with being more settled and confident and more secure in yourself in a new environment.

“You can’t say, ‘Come on, you have to give me 100 per cent immediately’ – you have to develop it and that’s what we’re doing at the moment and in a good way.”

Having come off the bench to score against Manchester City in the Community Shield and Fulham in the Premier League, Nunez made his first Premier League start against Palace.

But he missed a host of chances in the first half as Wilfried Zaha’s breakaway goal gave Palace the lead. The Uruguay international was then given his matching orders in the 57th minute after throwing his head at Palace defender Joachim Anderson.

He became just the second Liverpool player to be sent off on their first Premier League appearance at Anfield after Joe Cole was shown a straight red against Arsenal in August 2010.

“Lost his head [and] it’s a moment of madness,” former Liverpool midfielder Danny Murphy said on talkSPORT. “It’s a shame for him because he’s shown some great attributes and had some great chances.”

Despite gong down to 10 men, Liverpool were able to equalise moments later as Luiz Diaz scored a brilliant individual goal. Zaha hit the post in the closing stages but neither side were able to find a winner.