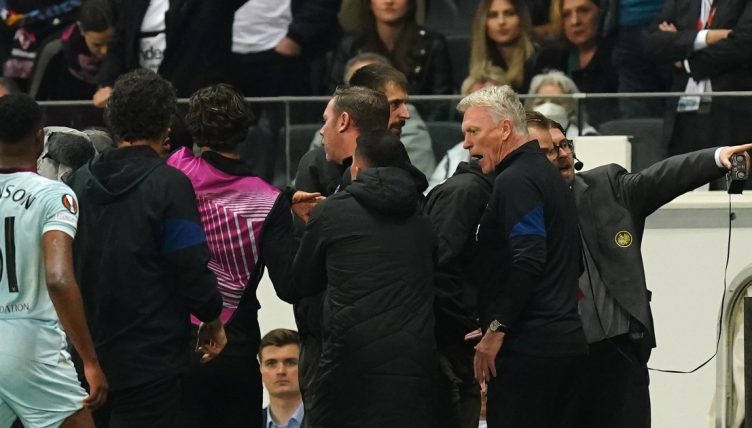 West Ham’s European adventure has come to an end – and their exit was made all the more ignominious after manager David Moyes was shown a red card for an altercation with a ball boy.

Moyes’ Hammers travelled to Frankfurt looking to overturn a 2-1 deficit after losing the first leg of their Europa  League semi-final at the London Stadium last week.

But their night went from bad to worse as Aaron Cresswell was shown a straight red for a last-man challenge – just as he was in an eerily similar incident against Lyon in the last round.

“You have to have learnt from his last mistake against Lyon. You can’t be handsy, unless it is appropriate. If he has not learnt from the last one, then this one was always going to be given,” fumed former West Ham striker Carlton Cole in BT Sport’s coverage at half-time.

“He was isolated one on one, and you just can’t be isolated, as soon as (Kurt) Zouma steps out, he is in trouble. He (Cresswell) will be disappointed, but it is what it is and the players out there have to deal with the consequences.”

A short while later West Ham went a goal behind on the night, two on aggregate, when Frankfurt’s Rafael Borre smashed home from Ansgar Knauff’s low cross.

Ten-man West Ham were unable to rally anything heroic and ultimately lost 3-1 over the two legs – something that evidently made for frustrating viewing for Moyes on one of the biggest nights of his managerial career.

It wasn’t immediately clear what happened from the camera footage originally, with the BT Sport commentary team sounding somewhat perplexed about what transpired, but the West Ham manager could be seen angrily booting the ball at someone.

Reports from inside the Deutsche Bank Park suggest that Moyes was frustrated about how long a ball boy was taking give the ball back, which is what caused him to lose his rag and smash it back in their direction.

Another red card for West Ham…

This time it's for David Moyes! 😳

The manager smashes the ball back in anger and is sent down the tunnel… #UEL pic.twitter.com/YYTZrqp2dg