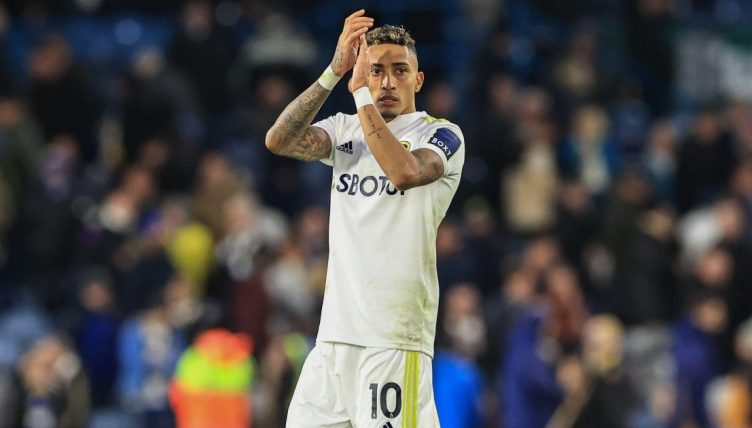 Arsenal have submitted a formal bid to sign Raphinha and David Ornstein has confirmed that the Leeds United and Brazil attacker has been a long-term target for Mikel Arteta.

The former Rennes man envisages playing for a higher-level club and has been heavily linked with La Liga giants Barcelona over the past six months.

But there have been difficulties for the two clubs to meet in the middle over his asking price and Leeds have been bracing themselves to field Premier League enquiries.

After Barcelona, Chelsea are said to be Raphinha’s preferred destination which would provide Champions League football and, potentially, also a better chance of winning major trophies.

Then come Arsenal – who play Europa League football next season – and Tottenham, who qualified for the Champions League but do not consider Raphinha as one of their first-choice options.

Arsenal are thought to have submitted an offer of £35million for the 25-year-old, miles away from Leeds’ valuation of their star asset. And, speaking to Rio Ferdinand’s YouTube channel FIVE, Ornstein revealed the long-standing interest Arsenal have held in Raphinha.

“Mikel Arteta and plenty of others at Arsenal really like Raphinha,” the transfer guru said.

“Their admiration is not particularly fresh, it goes back a little way, and he is clearly a player that they’d like to bring in.

“Let’s see whether it’s contingent on Nicolas Pepe’s future, whether Pepe needs to leave for it to happen or can Raphinha be bought in first and Pepe leaves afterwards.

“As I understand it, from speaking to sources around the game, Raphinha’s preference is to join Barcelona. But, it’s clear that Barcelona’s financial situation means the brakes have been put on a deal that seemed inevitable, whether or not Leeds were relegated.”

Leeds are expected to reject Arsenal’s initial offer for Raphinha but there remains every chance that Arteta could get his man this summer.