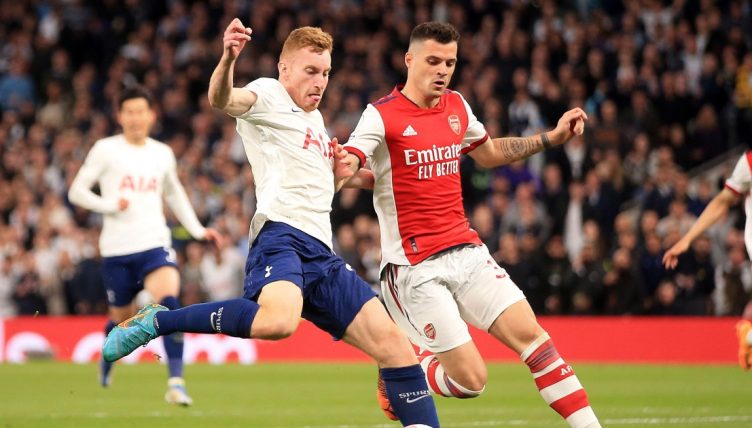 Tottenham’s Dejan Kulusevski enjoyed his first taste of the north London derby, helping his side to a 3-0 win over Arsenal at the Tottenham Hotspur stadium.

Kulusevski joined Tottenham on loan from Juventus at the end of the January transfer window and has made an immediate impact.

The Sweden international has starred alongside Harry Kane and Son Heung-min, registering three goals and eight assists in his first 15 Premier League appearances.

Antonio Conte unsurprisingly selected that front three against Arsenal and Kane broke the deadlock with a brilliant penalty in the 22nd minute.

After Arsenal centre-back Rob Holding received two yellows cards for fouls on Son, Rodrigo Bentancur flicked on a corner in the 37th minute and Kane headed home from close range.

During the closing stages of the first half, Kulusevski decided to showcase his skills in front of the elated Tottenham fans. He held off a challenge from Granit Xhaka before turning around and slotting the ball through his opponent’s legs.

While the piece of skill didn’t lead to anything, Son sealed the win for Spurs when he fired in from 10 yards two minutes after half-time.

Tottenham are now just one point behind fourth-placed Arsenal and both sides have two Premier Leagues games left in 2021-22.

“I’m proud of the boys,” Kane told Sky Sports after the game. “There was pressure on us, but we delivered well.

“We’re delighted to get the win, but there’s two more games to go and we have to focus on them. It’s a quick turnaround. We’ve got the bragging rights, but the most important thing is the Champions League, and we’ve put the pressure on them.

“We play early Sunday, so if we get a result we’ll see what happens.”

What a nutmeg from Dejan Kulusevski🔥🔥