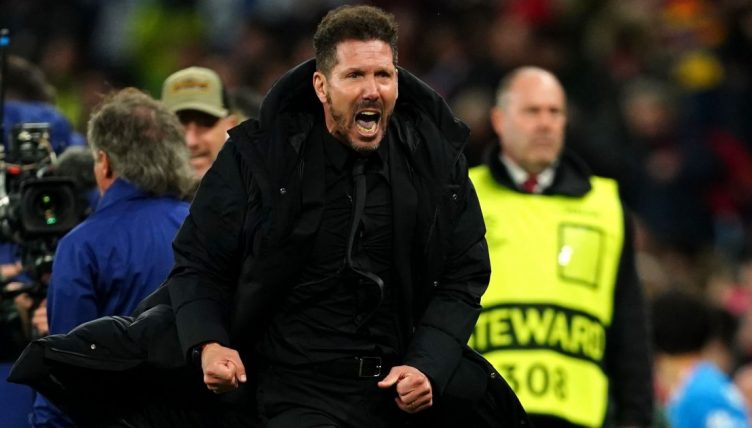 Manchester United fans were enraged after their Champions League defeat to Atletico Madrid at Old Trafford on Tuesday night – and they took out their rage on visiting manager Diego Simeone, showering him with drinks and other projectiles after the final whistle.

United had gone into the game extremely tense but also with a quiet sense of optimism.

They had managed to come away from the Wanda Metropolitano with a 1-1 draw in the first leg of their European round-of-16 tie against the Spanish Champions. And, on Saturday, they set themselves up for the second leg by beating Tottenham 3-2 at Old Trafford.

Talisman Cristiano Ronaldo scored a hat-trick in that game, the last goal of which made him the leading goalscorer in the history of men’s senior football with 807 in total.

In his programme notes before the Aleti second leg, manager Ralf Rangnick paid tribute, writing: “I would like to congratulate Cristiano for becoming the all-time leading scorer in world football.

But United were unable to carry that momentum into the game with Diego Simeone’s side, losing 1-0 to a first-half header from Brazilian wing-back Renan Lodi and crashing out of Europe for the season.

United players and fans were irate – at the outcome, of course, but also at the referee’s performance and Simeone’s celebrations.

Many – including Ronaldo himself – felt there had been a foul in the build-up to Atleti’s winning goal and fans on social media pointed to a series of other errors that in their view favoured Atletico.

At the end, the rage inside the stadium boiled over and the fans directed their ire at Simeone, a coach perceived as a master of football’s dark arts, as he ran down the touchline.

As Simeone made his way towards the Old Trafford tunnel at full-time, fans launched a mini-barrage of projectiles, including a fair few beverages, in the Argentine’s direction.

Simeone fortunately appeared to avoid most of them and make his way safely and dryly back to the dressing room.

While United fans’ anger is understandable, this is definitely not what you want to see.