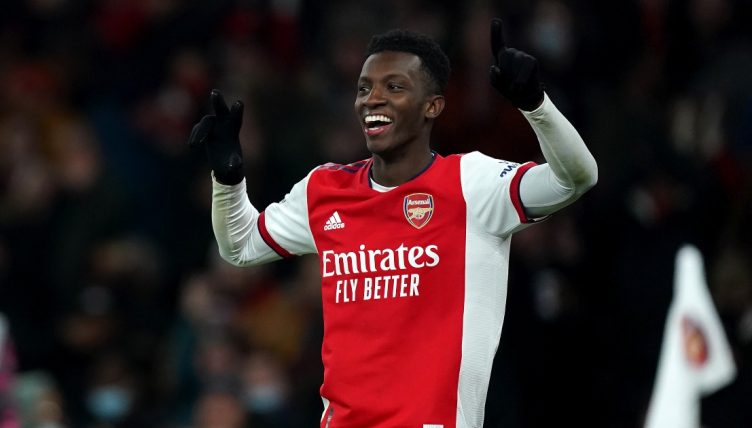 Eddie Nketiah has faced speculation over his Arsenal future but he reminded everybody of his talent by scoring a hat-trick in the 5-1 win over Sunderland on Tuesday evening – and we cannot stop watching his third goal.

Nketiah was handed a rare start by Mikel Arteta as Arsenal looked to secure their passage into the semi-finals of the League Cup and the young striker certainly seized his opportunity to impress.

The 22-year-old opened the scoring in the first half and grabbed his second four minutes after the interval to put Arsenal 3-1 ahead.

But Nketiah saved the best until last, with a glorious finish to cap an outstanding Arsenal move to seal the game for Arteta’s side.

Nicolas Pepe stole the soul of Denver Hume with an outrageous nutmeg along the byline and pulled the ball back to Nketiah.

With the kind of finish that suggests he possesses ice in his veins, Nketiah completed his hat-trick with a delightful backheel. We can’t decide whether the nutmeg or the finish was better.

After the game, Nketiah told reporters: “This competition is where I’ve been getting starts and opportunities to play, so wherever I’m asked to play I’ll do my best for the team.

I’m there if my manager needs me. I’m desperate to play football, but all I can do is keep working hard and hopefully I’ll get opportunities. I’m here, I’m under contract, and as long as I play for Arsenal I’ll give my all.”

Arteta said in response: “Eddie Nketiah wants more minutes, it’s difficult to go against that, but as a club and me personally, I really want him to stay here, and that’s what we are trying to do.

“He is a really important part of our squad.”