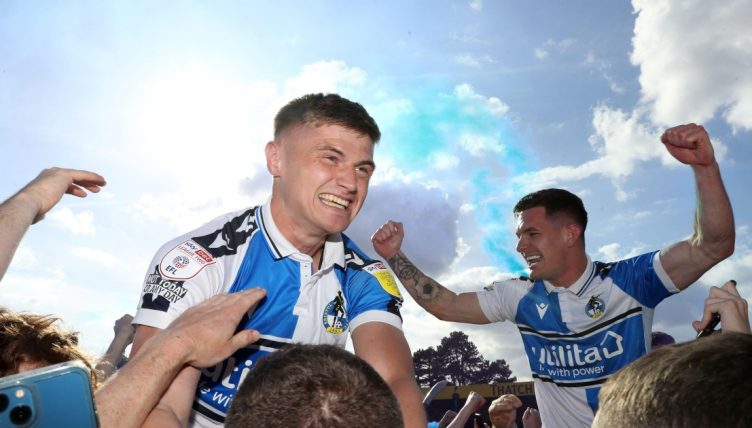 In incredible scenes, Newcastle loanee Elliot Anderson netted Bristol Rovers’ seventh goal against Scunthorpe to win the match 7-0 and earn his side promotion to League One.

Rovers needed a seven-goal swing to tie Northampton on goal difference but go up courtesy of having scored more goals.

In winning 7-0, they finished 3rd ahead of Northampton who will now have to go through the play-offs.

Anderson has been in exceptional form for Rovers, being recently voted as League Two’s Young Player of the month for April.

But no achievement in his young career could have come close to scoring the seventh of the match against Scunthorpe, a powerful header at the far-post after he outmuscled his man to create history.

It led to scenes of total jubilation throughout the ground, with the pitch being invaded by fans almost immediately.

Such was the extent of the invasion the match had to be stopped before it could finish, and there were fears that if the Rovers fans did not get off the pitch the referee would abandon the game and invalidate the result.

It took pleading from the manager Joey Barton, himself a former Newcastle player, over the tannoy system to eventually get the fans to move off the pitch.

“There have been some tough moments, but one thing that can’t ever be questioned is the character of our team and our players,” Barton said.

“As a direct consequence of that, the fans have turned up and supported them because they knew they give everything for the quarters. You get special days at football clubs if you get that kind of recipe.

“I didn’t expect us to win 7-0, I didn’t think anybody did. I was hoping for a Barrow draw, but were we going to do it any other way? Does this group do it easy?

“It’s probably something when I’m in my rocking chair and the fact I’ve headed a lot of balls out at the near post area has caught up with me, I’ll remember this favourably with Weetabix running down my chin and I’ll be thinking of the scenes at the Mem on this day.”

Anderson’s goal can be seen from 1:27 in the video below.