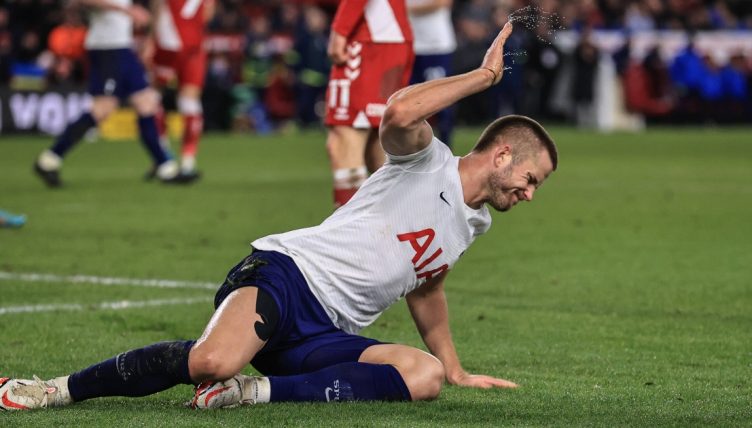 Tottenham Hotspur’s season went from bad to worse as they suffered a humiliating FA Cup exit at Middlesbrough on Tuesday night – and Eric Dier epitomised the supporter’s anger when he railed at Son Heung-min for losing the ball cheaply in midfield.

Antonio Conte named his strongest possible XI for the trip to Middlesbrough as Spurs continued their quest for their first piece of silverware since 2008.

But the Premier League side were outplayed by their Championship opponents for long periods of the match at the Riverside Stadium.

Folarin Balogun, on loan at Boro from Arsenal, had a huge chance to open the scoring, but the youngster’s effort from the edge of the box was off target.

The chance came after Son lost the ball cheaply in the middle of the park. The South Korea international received a pass at the halfway line from Pierre-Emile Hojbjerg and, just as he was about to go the other way, he lost the ball and almost cost Spurs in the second half.

Son’s team-mate Dier was fuming at this sloppy piece of play and made no attempt to hide his frustration. The defender marched straight up to Son and bellowed his displeasure directly into his face.

The Spurs forward had a shocker, along with most of his team-mates, as Conte’s side fell victim to Josh Coburn’s extra-time strike that gave Boro a 1-0 victory and sent them into the FA Cup quarter-finals.

“When you play this type of game, you have to be very good from the start,” the Spurs boss said afterwards. “We had the chances to score and to kill the game but we didn’t take them.

“We have to continue to work hard with the players, to try to learn about these defeats. The important thing for us is to avoid up and down, up and down.”