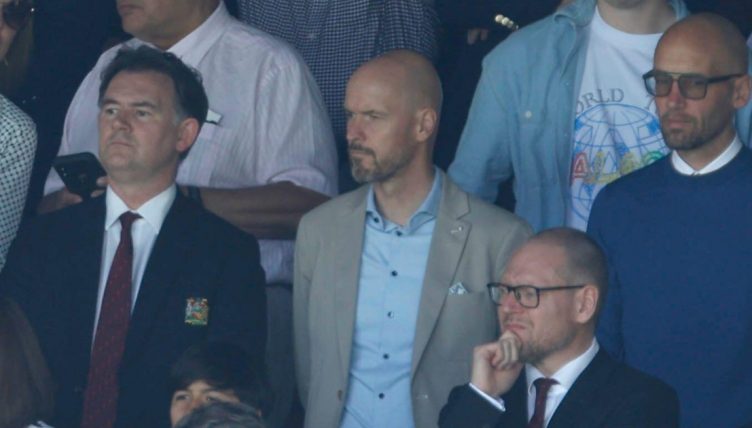 Erik ten Hag travelled to Selhurst Park to watch Manchester United take on Crystal Palace on the final day of the season.

Ten Hag has agreed on a three-year contract at United and will replace interim manager Ralf Rangnick in the dugout once the season ends.

The 52-year-old recently won his third Eredivisie title with Ajax but decided not to go on their post-season trip to Curacao.

He arrived in London on Thursday morning and has already started making preparations for the 2022-23 season.

“We’ve been in contact via WhatsApp and hopefully we will have the opportunity to meet and speak in person, either at the weekend or Monday morning at the latest,” Rangnick said at his final press conference.

“I’m looking forward to speaking to him in person and getting to know him in person.I still strongly believe there is a core of players who are good enough to play for the club and hopefully most of them will still be here.

“Hopefully if the board and Erik bring in players with the right mentality, I am positive we will be able to bring this club not just on the right track but to the top. Maybe it will not happen in one transfer window but I am positive in the next two or three.”

Ten Hag has now decided to watch United in person as they take on Crystal Palace and was joined by Mitchell van der Gaag, who worked as his assistant at Ajax and looks set to be part of his coaching staff at Old Trafford.

Despite Ten Hag being at Selhurst Park, Rangnick has insisted that the incoming manager had no input on the team selection.

Incoming #MUFC boss Erik ten Hag is in attendance to watch his new side today 👀🔴 pic.twitter.com/WYozYeMmXR