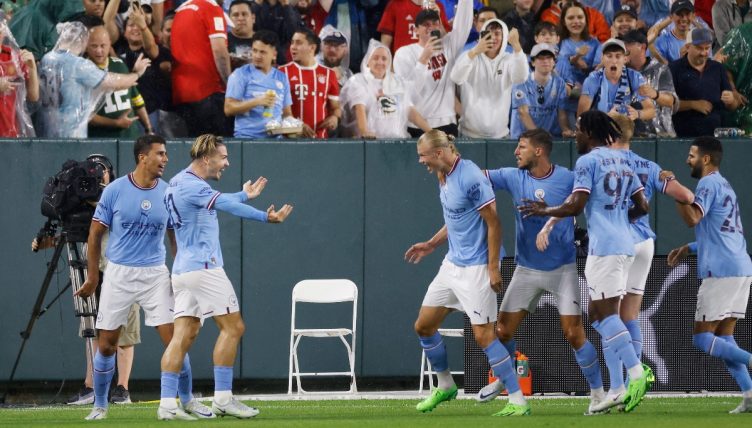 Erling Haaland and Manchester City gave us a terrifying glimpse into the near future, with the star striker needing just 12 minutes to score his first goal at his new club.

Man City beat Bayern Munich 1-0 at the Lambeau Field in Green Bay, Wisconsin last night – and it should come as no surprise to hear that it was Haaland with the match-winner.

The 22-year-old has plenty of experience of playing against Bayern, having turned out for Borussia Dortmund in recent years, and the early evidence of his rapid ascent to superstardom shows no signs of abating.

Haaland has a ludicrously prolific goalscoring record, having once notched nine goals in one game for Norway’s Under-19s. He averaged a better-than-a-goal-a-game record with 29 in 27 appearances for Red Bull Salzburg, before scoring 86 goals in 89 appearances for Dortmund – including a famous hat-trick in just 23 minutes on his Dortmund debut.

Given that record, it was almost inevitable that it would take him just a matter of minutes to score for Pep Guardiola’s all-conquering, ludicrously-creative Man City side.

Kevin De Bruyne and Jack Grealish were involved in the build-up as Haaland demonstrated his lethal attacking instincts to slide into the six-yard box and fire home from short range.

“He scored a goal which is important, these type of goals in front of keeper – always he’s there,” Guardiola said after the friendly victory, via Man City’s official site.

“The first minutes, he needs more rhythm and time but already he had 45 minutes which is good for him.

“We’ll see how he reacts to the niggles that he had in the previous weeks.

“After we come back we have long weeks to prepare every weekend game. In those two or three weeks we will get the best form.”

Man City are set to return from their tour and face Liverpool in the Community Shield in their next outing next Saturday.

This angle of Haaland's debut goal for Man City 🤩 pic.twitter.com/EbZSiNfOyl