Watch: Everton’s celebratory pitch invasion will give you goosebumps 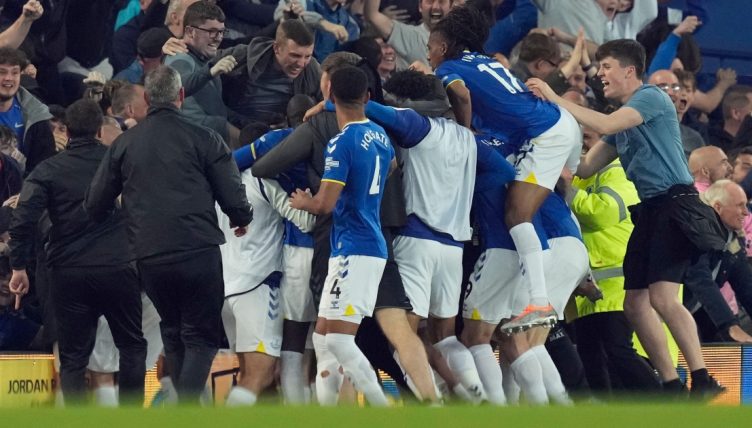 Everton fans were given a night to remember after their 3-2 comeback victory over Crystal Palace that’s ensured Premier League survival – and the subsequent pitch invasion at Goodison Park was the very definition of life-affirming.

It’s been a turbulent season at Everton as both Rafa Benitez and Frank Lampard oversaw the Toffee’s nosedive towards the relegation zone.

Things looked bleak after a damaging defeat at Burnley in April and, despite a valiant victory over Manchester United, Everton entered May five points adrift of safety and in real danger of their first relegation since the 1950s.

But Lampard has sufficiently rallied the troops and, after wins over Chelsea and Leicester, Everton came into Thursday’s match with Palace knowing that victory would keep them up.

Goals from Jean-Philippe Mateta and Jordan Ayew gave Palace a two-goal lead at half-time but Everton rallied during a raucous second-half at a raucous Goodison.

Michael Keane and Richarlison levelled the scores before a late diving header from Dominic Calvert Lewin sparked bedlam in the old stadium and completed a famous comeback victory for Everton.

After the final whistle blew, and with Premier League survival secured, the pitch at Goodison was flooded by joyous Everton supporters who had experienced the full range of emotions over the 90 minutes – and the season as a whole.

Pitch invasions have been getting a bad press recently, especially after a Nottingham Forest fan assaulted Billy Sharp on Tuesday, but this was a peaceful expression of uncontained joy and Evertonians rejoiced in their side’s salvation.

It’s the kind of moment that the words ‘scenes’ were invented for and the pictures from Goodison Park will leave anybody who loves football with goosebumps.

Everton will face Arsenal in their final game of the season on Sunday safe in the knowledge that their top-flight status is secured for another year.