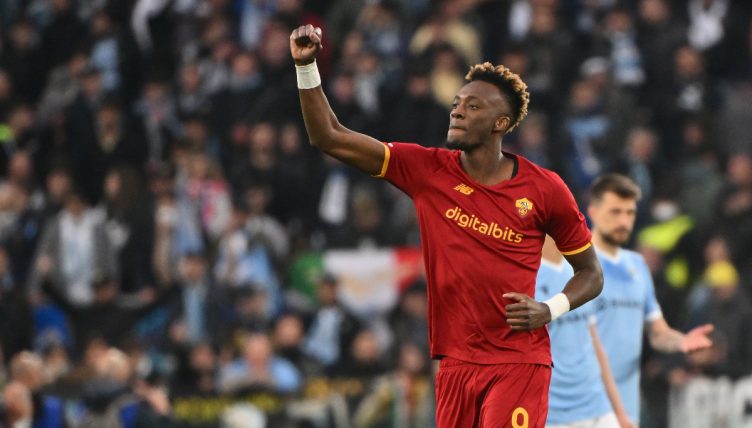 On a big derby day in Rome, as Jose Mourinho’s Roma took on their bitter rivals Lazio, their top scorer delivered yet again as Tammy Abraham opened the scoring in the very first minute at Stadio Olimpico.

In a bizarre set of events, Lorenzo Pellegrini’s early corner looked goalbound but cannoned back off the crossbar, and the rebound was bundled in by the England striker.

The goal took Abraham’s season tally to 21 for the season, and the 24-year-old continues to impress in his Italian adventure.

Joining Roma in the summer of 2021 in a move worth £40million was a brave choice for Abraham who left Chelsea, the club he joined as a five-year-old, and he has been worth every penny for the Italian giants.

Abraham struck again in the 22nd minute to extend Roma’s lead, and if they see out the victory, they will leapfrog Lazio into fifth in Serie A.

The striker will be hoping to continue his fine form going into the business end of the season in both the league and the Europa Conference League, and is playing with supreme drive and confidence.

Jose Mourinho lavished Abraham with praise when he followed Mourinho from London to Rome in the summer.

“I prefer to say wait and see for Tammy, but I say that with total confidence. I’ve known him since he was a boy. He never played for me, because he was a 14, 15, 16-year-old when I was at Chelsea, but I know him very well,” Mourinho claimed.

“I know him as a player, a person and in terms of mentality. It is always tough for an English player to leave his country and the Premier League, and that says so much about him.

Although this was hardly his most glamourous goal, it set the tone for the rest of the game in one of the most heated and dramatic derbies in Europe.

A dream start for Roma ✨

Tammy Abraham scrambles the ball over the line for an incredible start to the Derby 🟡🔴 pic.twitter.com/BTKaJHPnko