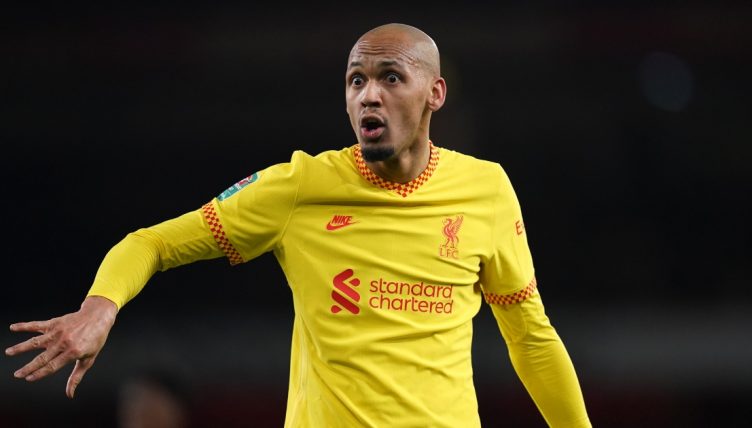 While Ibrahima Konate scored the opening goal in Liverpool’s 3-1 win over Benfica in the Champions League, Fabinho still managed to steal the show.

Konate, who joined Liverpool from RB Leipzig last summer, headed home Andy Robertson’s corner in the 17th minute to score his first goal for the club.

After finding the back of the net, the centre-back ran towards the corner and did a perfect knee-slide in celebration. Fabinho then tried to copy the antics of his team-mate but it didn’t quite go to plan.

The Brazil international’s knee held up in the grass and he tumbled over, leading his wife to make fun of him on social media. Rebeca Tavares shared in a tweet: “What happened with fab celebration” followed by a series of laughing emojis.

Fortunately, the midfielder didn’t suffer an injury and got back to his feet unscathed with a massive smile on his face.

Liverpool doubled their lead at the Estadio da Luz when Luis Diaz cushioned a header into the path of Sadio Mane, who made no mistake from close range.

Darwin Nunez, who has recently been linked with Manchester United and Arsenal, pulled a goal back for Benfica at the start of the second half but Diaz restored Liverpool’s two-goal in the closing stages.

After the knock to the knee in the first half, Fabinho later required lengthy treatment after a clash of heads with Nicolas Otamendi during injury time.

“He’s fine,” Liverpool boss Jurgen Klopp said after the game. “That is how it looks, it is a cut on the back of his head and there is no hair to hold the blood back. But he should be completely fine.”

Liverpool will now face Manchester City in a huge game in the Premier League before welcoming Benfica to Anfield for the second leg of the Champions League quarter-final.

Fabinho will never hear the end of this knee slide 😂#UCL pic.twitter.com/dzJbKsxHL8