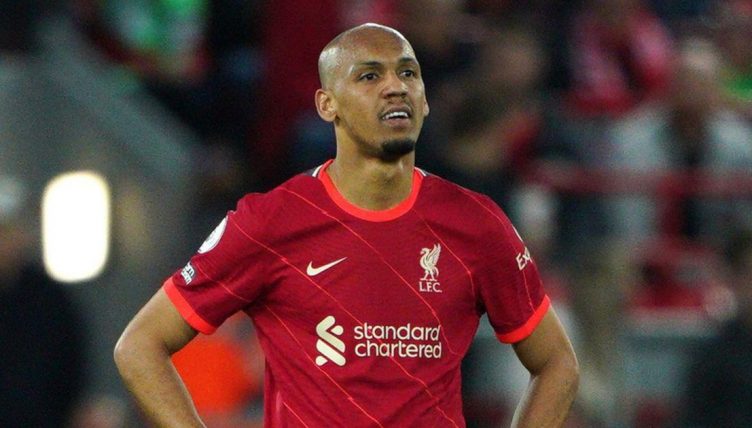 Liverpool midfielder Fabinho could count himself lucky not to be sent off during his side’s 1-1 draw with Tottenham at Anfield on Saturday night. He received only a yellow card for an elbow on Son Henug-min that was at best extremely clumsy.

The incident came just 11 minutes from the end when the score was already 1-1. Son was advancing up the middle of the pitch when Fabinho came across in an attempt to stop him.

The Korean forward flicked the ball past Fabinho with the outside of his right boot, taking his Brazilian opponent out of the game. Unfortunately for Son, Fabinho returned the favour, only in a very different manner.

The Liverpool midfielder barged into Son and as he did, his right arm came up, with his elbow catching the Spurs man flush in the neck.

Whether it was deliberate or not is hard to tell from the footage, but the contact was brutal nonetheless. Son went down like he’d taken a right hook from Mike Tyson.

Fabinho was perhaps fortunate to escape with only a booking. A red in this situation would likely have angered the Anfield crowd and Reds boss Jurgen Klopp – but we’ve seen ’em given.

Had Fabinho been dismissed, it would have made the final ten minutes very different, as Liverpool looked to come back and take the win.

Son had given Spurs the lead in the 56th minute, tucking away a Ryan Sessegnon cross. The home side levelled things up after 73 minutes when Luis Diaz’s shot was deflected into the net.

From there, it was almost all Liverpool as the Reds attempted to snatch the three points and keep the pressure on Manchester City in the title race.

Spurs held firm, however, and took a point back to north London.

After the game, Klopp was unhappy about his opposite number Antonio Conte’s approach to the game. The German said: “I am sorry, I am the wrong person to ask about [Spurs’ defending] because I don’t like this kind of football. But that is my personal problem.