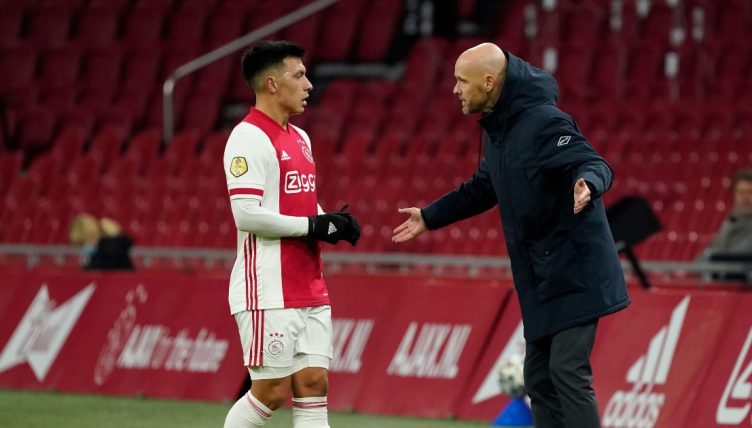 Fabrizio Romano has confirmed that Manchester United are in talks for four of Erik ten Hag’s former players.

That’s Barcelona star Frenkie de Jong, who played under Ten Hag at Ajax prior to his big-money move to the Camp Nou in 2019, along with current Ajax trio Jurrien Timber, Antony and Lisandro Martinez.

Whilst United’s interest in De Jong is well publicised, their discussions with Ajax over three potential signings are less so.

“Jurrien Timber is the most complicated, so they know there are not many chances [for a transfer].

“But on Timber’s side they are still waiting on the final confirmation on the future of the player, so at the moment it is still something I would keep open but of course, Ajax are not selling both Martinez and Timber.

Martinez is heavily rumoured to be Arsenal’s next transfer target after negotiating a deal for Leeds United forward Raphinha, the Gunners having already sewn up a deal for Gabriel Jesus from Manchester City.

“We know that for Lisandro it is like a battle with Arsenal,” Romano said.

“Arsenal are really serious on Lisandro. Manchester United are really interested but at the moment it’s an open situation.”

The third of the Ajax trio United are interested in according to Romano is Brazillian winger Antony. A technical dribbler, reports suggest that Ten Hag would like to bring the 22-year-old to Old Trafford to add depth and quality to his attack.

“For Antony, it is the most concrete one [rumour], I’m really curious to see what happens this week or next week,” the Italian transfer guru said.

“From what I’m told about Antony, his agents, his camp are really pushing with Ajax to discuss with Manchester United.

“They know that Ajax have already lost many important players… and so it is not easy for Ajax to accept to sell so many players, but at the same point Antony wants to understand his position with Manchester United. It’s a positive message from the player.

“When Ajax see the value of a potential deal around £40million they are never going to something like that, so it won’t be an easy negotiation.”