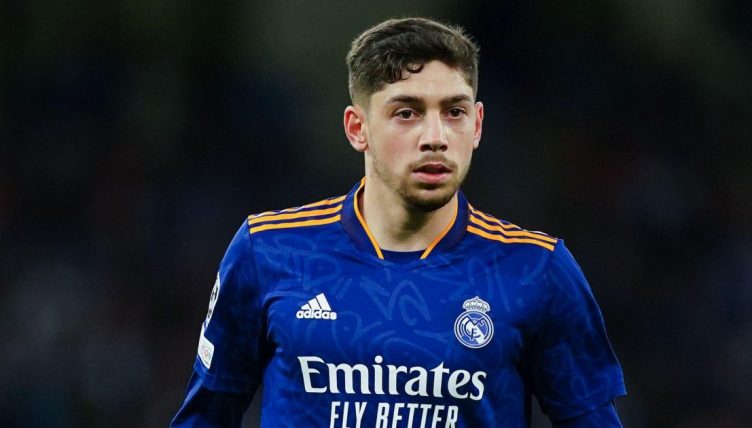 Federico Valverde showed his class and his calm in the maelstrom of Real Madrid’s 3-4 away loss to Manchester City in the Champions League semi-final first leg, pulling off an outrageous spinning backheel nutmeg in the second half.

Valverde started the game in central midfield in the absence of Casemiro, who was suffering from a muscular injury. The Uruguayan has filled a number of roles this season for Madrid, with his importance to the squad growing season on season.

And he showed why he is winning Ancelotti’s trust with a brilliant bit of skill late in the second half.

Receiving a pass from Dani Carvajal, Valverde span around and simultaneously managed to flick the ball through the legs of his marker, City’s Ukrainian international Oleksandr Zinchenko.

Carvajal continued his run and managed to collect the ball on the other side, meaning Valverde’s touch was effective as well as aesthetically pleasing.

The City encounter was Valverde’s 38th club game of the season and he and his team-mates showed guts to come back into a match they at times looked like they might lose heavily.

City took a 2-0 lead in just the 11th minute and also led 3-1 and 4-2. But a late Panenka penalty from Karim Benzema – the Frenchman’s second of the night – brought Madrid back to 4-3 and gave them hope for a second-leg turnaround at the Bernabeu.

After beating Chelsea in the quarter-final, a game in which Valverde played on the right wing, Madrid boss Carlo Ancelotti told the club’s official site: “We played with the same system, but I put Valverde in to tighten up Chelsea’s left wing a bit.

“Valverde did really well. It all depended on Azpilicueta’s position. If he stayed back, Valverde moved forward.”

After his strong display and delicious nutmeg at the Etihad, the Italian coach would have been pleased with his Uruguayan midfielder once more.