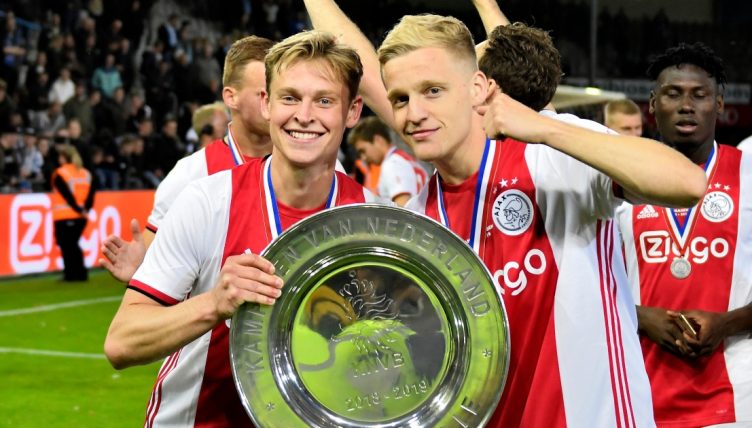 De Jong and Van de Beek played in midfield together for Ajax’s Under-21s and then they established themselves in the first team.

The pair were integral parts of the Ajax side which knocked out Real Madrid and Juventus en route to the Champions League semi-finals in 2018-19.

De Jong completed a £65.3million move to Barcelona at the end of that season and Van de Beek was heavily linked with Real Madrid.

“I am pretty sure he has the ability,” De Jong told ESPN in 2019 when asked about Van de Beek. “I think he showed it last season in the Champions League, especially in the knockout rounds.

“I think he has shown to the world and everyone in Europe he has the ability to play at that level.”

But Van de Beek’s move to Madrid failed to materialise and he spent another year at Ajax before joining United in a £36million deal.

“I spoke to Donny about his transfer,”  De Jong said back in 2020. “This is a beautiful transfer and we are all very happy for him. Did he ask me for advice? No, no, he can think by himself.”

Van de Beek has struggled to make an impact at United, starting just four Premier League games for the club before spending the second half of 2021-22 on loan at Everton.

The midfielder will now try to revive his faltering career under new United boss Erik ten Hag, who worked with him at Ajax.

United are reportedly close to signing De Jong from Barcelona and his arrival could also be good news for Van de Beek. The duo had a good partnership on the pitch and an old video that shows them practising keepy-uppies together has resurfaced online.

United fans will be hoping they replicate this connection on the Old Trafford pitch in 2022-23.

These two in midfield next season 😍pic.twitter.com/azD7Ew8Xsi