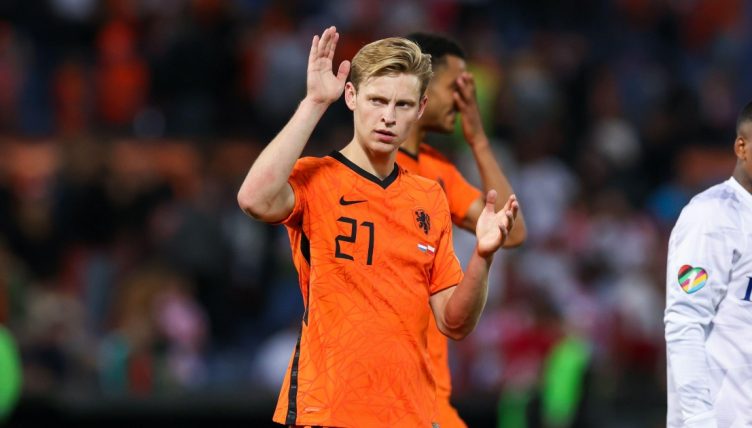 Barcelona midfielder Frenkie de Jong laughed when asked about reports linking him with a move to Manchester United.

De Jong is a priority target for new United manager Erik ten Hag this summer as he looks to strengthen their midfield following the departures of Nemanjic Matic and Paul Pogba.

Despite playing under Ten Hag at Ajax, the midfielder initially seemed reluctant to join him at United and expressed his desire to remain in Spain.

“I prefer to stay with Barcelona,” De Jong told ESPN in May. ‘Barcelona is just my dream club. Also from a young age. I just said it too.

But Barcelona need to raise money this summer as they look to pursue Manchester City’s Bernardo Silva and Bayern Munich’s Robert Lewandowski.

The Atheltic have also reported that De Jong has since given private indication that a move to Old Trafford appeals to him.

United have been in talks with Barcelona for a number of weeks and have now tabled an offer worth an initial £51mllion plus a further £8.5mllion in add-ons.

The Spanish giants, who reportedly value De Jong at about €85million, rejected the offer but the two clubs remain in contact.

The 25-year-old is currently on international duty with the Netherlands and played the full 90 minutes in their 2-2 draw with Poland.

After the game, De Jong was asked if he will be swapping the beaches in Catalunya for the cold in Manchester, and he laughed before replying: “No… I can’t say anything.”

Interviewer: "Are you leaving the beaches of Catalonia to the cold of Manchester?”