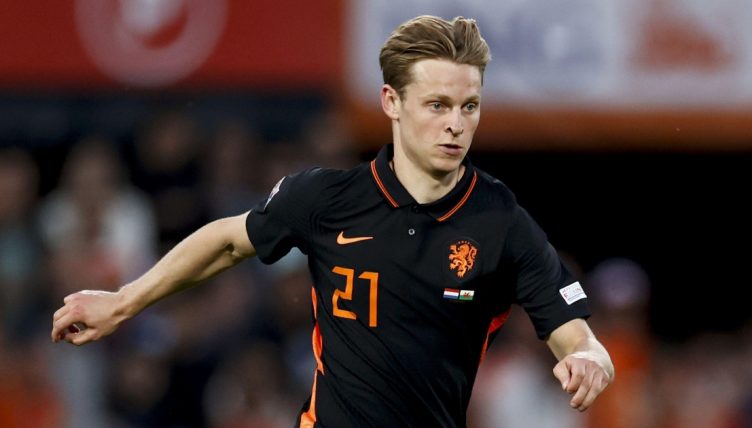 Frenkie de Jong has admitted that he’s flattered by Manchester United’s interest in him – but also insists that he’s happy at Barcelona.

De Jong worked under new United manager Erik ten Hag during his time at Ajax and was part of the side that reached the Champions League semi-finals in 2019.

The midfielder then joined Barcelona in a £65million deal and has made 140 appearances for the club, winning a Copa del Rey title in 2021.

But he’s struggled to replicate his Ajax form at Camp Nou and often produces his best performances when he’s playing for the Netherlands.

“I like to be the first player to receive the ball from the defenders,” he recently told NOS. “In the national team, I play differently compared to Barca. And I think this one fits me better.”

Ten Hag has reportedly made De Jong his number one target this summer and United have had an opening bid of €70million rejected by Barcelona.

The 25-year-old is not pushing to leave Barcelona but they may be forced to sell due to their ongoing financial issues.

After helping the Netherlands to a 3-2 win over Wales in the UEFA Nations League, De Jong was asked about his future.

“You’re always flattered when teams show interest in you as a player but I am at the biggest club in the world at the moment and I feel fine there, so no news,” he said.

According to reports, United have now offered a contract to Christian Eriksen, who is a free agent after spending the second half of last season at Brentford.

But the Daily Mail claim that United see Eriksen as a different type of midfielder to De Jong and will continue negotiations with Barcelona.