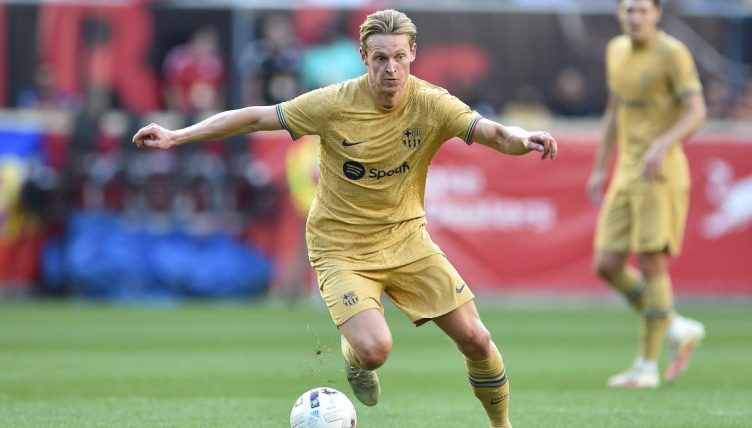 Barcelona president Joan Laporta has refused to rule out the possibility that Frenkie de Jong could leave the club for Manchester United.

De Jong has been United’s top target this summer as manager Erik ten Hag is hoping to reunite with the former Ajax midfielder. But the transfer saga has been rumbling on for around three months and a deal looks no closer to completion.

While Laporta has said that he wants to keep the Netherlands international at Camp Nou, the president refused to categorically say that De Jong won’t join United.

“In football, you never know,” Laporta told CBS Sports. “I cannot say categorically because [it’s] depending on different parties.

“But in principle there are a lot of possibilities that he stays and I can say that as a president I do my best for him to stay at Futbol Club Barcelona.”

Alongside United, Chelsea have also been heavily linked with De Jong in recent weeks as Thomas Tuchel looks to bolster his midfield.

According to The Athletic’s David Ornstein, the Blues are currently speaking to Barcelona about the 25-year-old and are optimistic about striking a deal.

Laporta was recently seen meeting with New Chelsea owner Todd Boehly at the Via Veneto restaurant in Barcelona.

“No, no, no,” Laporta said when asked if he’d offered De Jong to Chelsea. “We had a very nice dinner in Barcelona and we talked in general about football.

“He’s a very profitable and successful businessman, and he is involved in sport with Lakers, Dodgers and now with Chelsea.”

One of the issues reportedly holding up De Jong’s departure is the fact that he is owed £17million by Barcelona in deferred wages.

Former Manchester United captain Gary Neville has criticised Barcelona for spending over £100million on new signing this summer when they still owe money to players.

“I respect all the opinions but in my opinion, they don’t have enough information in order to say these statements,” Laporta added. “The players we have signed this summer is an investment and sometimes these people consider it as an expense.

“At the same time, our existing players understand perfectly our investment because the players that are coming, the players that we are signing, they adjust their salaries to the new structure of Futbol Club Barcelona that we have created.

“If we don’t do anything, probably the club would disappear.”

Frenkie de Jong next? The 10 players Man Utd have signed from La Liga