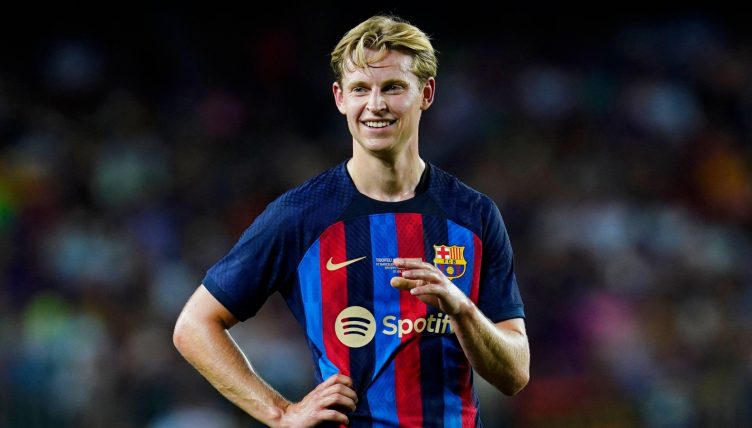 Manchester United and Chelsea target Frenkie de Jong is on his way to England – and transfer guru Fabrizio Romano has explained why.

United manager Erik ten Hag worked with De Jong during his time at Ajax and made the Netherlands international his top transfer target.

According to reports, United agreed a deal with Barcelona and were prepared to pay a guaranteed fee of £63million plus £8.47million in add-ons.

But the midfielder has publically stated his desire to remain at Camp Nou and any move is complicated by the fact that he is owed around £14millon in deferred wages.

Chelsea are also looking to bolster their midfield and reportedly made a few enquiries for De Jong but they encountered similar diffculties.

United have since signed Casemiro and look set to bring in Antony and Martin Dubravka before the end of the transfer window. Chelsea, meanwhile, are completing a £70million move for Wesley Fofana and are also trying to sign Pierre-Emerick Aubameyang from Barcelona.

But De Jong started on the bench for Barcelona’s 4-0 win over Real Valladolid on Sunday and then sent the rumour mill into overdrive by boarding a flight from Barcelona to London on Monday.

While Chelsea and United fans got excited on social media, Romano provided some clarity on the situation during his latest YouTube video.

“The image of the day is from El Chiringuito showing that Frenkie de Jong is flying to London and many of you are asking me about Chelsea, Liverpool and Man United of course,” he said.

“I was checking during the morning [and] Frenkie is travelling together with Memphis Depay because he’s on holiday. Xavi decided to give some holiday to the players after their amazing game for Barcelona so he’s on holiday in England.

“He’s not there to undergo medical tests or complete any move. At the moment the situation is still the same, Frenkie has not changed his mind and he’s still focused on staying at Barcelona.”

Romano added: “From what I’m told, Chelsea were really pushing for Frenkie de Jong, really trying to tempt the player and Barcelona but as of now Frenkie is still on the same position.”

There are some reports suggesting that De Jong and Depay will be in England to see Donny van de Beek get married to Estelle Bergkamp, who is the daughter of Arsenal legend Dennis.