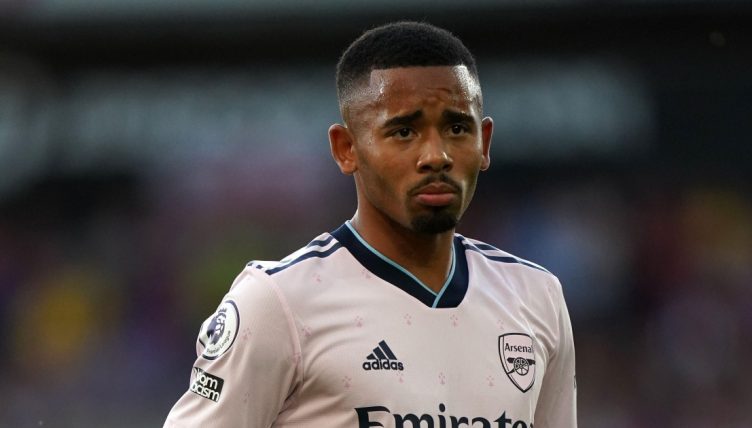 While Gabriel Jesus didn’t mark his Arsenal debut with a goal, he still managed to showcase his skills in the 2-0 win over Crystal Palace.

Jesus joined the Gunners in a £50million deal earlier in the summer after scoring 95 goals in 236 appearances during his time at Manchester City.

The striker was signed as a direct replacement for Alexandre Lacazette, who left the Emirates on a free transfer at the end of last season.

Jesus then enjoyed a brilliant pre-season campaign, scoring seven goals in five friendlies at a rate of a goal every 37.85 minutes.

The Brazil international looked full of confidence in the opening stages against Palace and produced a cheeky nutmeg on Cheick Doucoure in the third minute.

Despite the fact that Doucoure tried to foul him, Arsenal’s No.9 remained on his feet and then showed brilliant footwork to skip around Joachim Andersen.

Jesus’ shot was blocked by the chest of Marc Guehi and the ball fell to Gabriel Martinelli, who somehow fired wide from just six yards out.

“Arsenal were absolutely electric up front in the first five or 10 minutes. You were just thinking ‘wow’ [when] watching Jesus,” Gary Neville said.

“We saw glimpses of it at Manchester City but we watching him tonight and it was magical. The runs he was making were absolutely brilliant. Jesus just looked a level above.”

Former Liverpool defender Jamie Carragher added: “Jesus was excellent, he really was. He was so sharp, he was just electric.

“He did one run and I just couldn’t believe it. I was so glad I wasn’t playing against him. He was sensational in that first half.”

Despite missing that great chance, Martinelli nodded in a 20th-minute opener from Oleksandr Zinchenko’s headed assist. Palace grew into the game in the second half until Guehi inadvertently headed Bukayo Saka’s cross into his own goal in the 85th minute.

While William Saliba was officially named Man of the Match, Jesus was also one of Arsenal’s standout performers at Selhurst Park.

“The fear factor,” Arteta told Sky Sports after the game when asked how big a difference the 25-year-old will make to his attack. “He’s always on your shoulder, the ball is bouncing, that 50-50 ball. He’s always had that intuition, that ability to get the ball off you.

“He’s never standing still, he’s always on the move. He’s always ready to act. He’s so sharp and for defenders it’s difficult to play against him.”