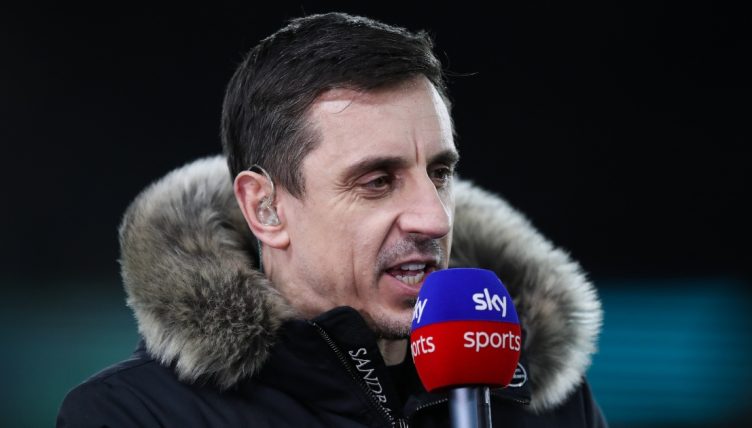 Gary Neville has outlined his expectations for incoming Manchester United manager Erik ten Hag, which include winning the Premier League title by his fourth or fifth year at Old Trafford.

Ten Hag will arrive in the summer from Ajax and is tasked with bringing silverware back to the red half of Manchester following United’s horrendous 2021-22 season and five years without a trophy.

And the outspoken Neville believes the Dutch manager can instigate some real change at United and get the club back amongst the elite of English football.

“I said four to five years to win a title and I don’t disagree with Jamie’s timeline of Champions League in the first two seasons while he’s sorting the recruitment out and getting used to the club,” Neville said on Sky Sports ahead of United’s 3-0 win over Brentford tonight.

“Third season getting very close, I think to the point whereby the club have got confidence and won a trophy maybe.

“And then that fourth-year really is where they have to win a title, fifth year. That’s where I think really you’re looking at the moment realistically.

“We all hope he comes in and blows everyone away and that Jurgen Klopp and Pep Guardiola blow up somehow.

“But they’re not blowing up are they? They’re achieving the same numbers of points year in year out so if their consistency remains, which there’s no reason to say it won’t then Ten Hag’s got a massive job to make up that points gap.”

And Roy Keane stated that United need to improve their recruitment before starting to challenge Liverpool and City.

“Whatever their problems, they have to look at where Man City are, where Liverpool are,” Keane said.

“Man City, Liverpool and these other teams aren’t going to take it easy over the summer. They’re going to reinvest, get players in and get stronger.

“Klopp might stay on, Pep might stay on. It comes down to recruitment: getting the right players in and getting players out of the door, because the last few years just haven’t been good enough.”